As you've no doubt heard, congress passed a so-called Covid Relief bill, costed at $1.9 trillion.  There are estimates that the mostly-leftist agenda spending bill might spend as much as $1.37 for actual Covid relief.  Not $1.37 trillion; a buck thirty seven in the bill is actually spent on Covid nationally.  I know that estimate exists because I just made it up.

The real truth is we just don't know all of what's in the bill.  It's another case of the "we have to pass the bill to see what's in it" as Comrade Pelosi said about Obamacare.  The Senate just passed it and the governmental monitoring agencies are undoubtedly going through their bill now.  In reviews of the House bill, there were many stories that 9% of the spending was actually on Covid - and just as many news sources "debunking" that number.  Ooo!  I trust the media.  Said no one in the last 20 years.  The Committee for a Responsible Federal Budget had Covid spending even lower than 9% in the house bill.

We know that before Covid, the Federal Budget ran about $4 trillion in spending, which means this one bill knocks federal spending up to 150% of normal spending.

Assuming it is 9% of the bill that's doing what the bill is supposed to be doing, what's the other 91% doing?  Bailing out Democrat Party favorites, what else?  Senator Marsha Blackburn of Tennessee call this the biggest transfer of wealth in history.  She declares the bill (not signed so not finalized when she did this talk), “disproportionately benefits poorly-managed blue states at the expense of well-managed red ones.”


“Tennessee, on the other hand, still one of the best and most fiscally-responsible states in the country, we’re going to lose $164 million – for doing the right thing. 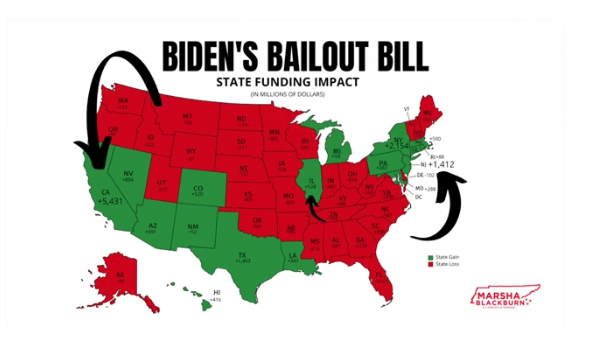 The only thing I've read about the bill since the senate passed it, sending it back to the house to resolve the differences, is that they included a tax on income earned in the so-called Gig economy.  The story is from the Foundation for Economic Education, FEE, and is dated Friday.


Under current tax law, earnings data for gig economy workers only needs to be reported to the IRS once it reaches $20,000. This means that small earners pursuing gig work to supplement their income aren’t hit by crushing federal taxes. However, the Democrats’ provision would nearly eliminate this benchmark, and instead require all income above $600 to be reported to the IRS.

“The stiffer tax burden would be imposed while 10 million Americans are unemployed and more and more have turned to freelance and gig economy work to make ends meet,” Roll Call notes.

The tax adds a significant burden to small business workers at a time when many are suffering.  Why add this tax in a bill to supposedly help out those suffering from the economic effects of the pandemic?  This isn't the leftist's typical "tax the rich" approach; this is "tax the unemployed."  The unions have been trying everything they can to get rid of Uber, Lyft, and their competitors that aren't unionized.  They got California to pass AB5; this is a move to attack them on the national scale.  I have to assume it's a union handout by the Dems.

It sure isn't an attempt at financial responsibility.  FEE estimates this income tax on part time workers might raise a billion.  That's a rounding error to a $1900 billion spending bill.