Back on the last couple of days of February, I talked about trying to figure out what engine I'm building next.  (Feb 27 and Feb 28).  I've made some progress by hearing about engines I either didn't know existed or didn't know enough about to consider.  I'm closer to choosing a Hit and Miss engine and am looking at a few options.

Perhaps I should explain a little bit about what terms I'm going to drop mean.  Hit and miss is a type of speed-regulated engine; an engine with a governor.  There are many examples around, but they were popular early in the 20th century on farms and in other light industry, where they'd often be mounted on a cart and wheeled to the next machine they were going to power. They had some sort of centrifugal force governor that was typically linked to the exhaust valve. If the engine was running too fast, the centrifugal force would spread the governor and the valve would be pushed open so that the engine no longer had compression, didn't fire, and slowed down. If the load slowed down engine RPMs, the valve would operate normally a higher percent of the time.  You can see the negative feedback: if RPMs are too high, the system slows it down and if RPMs are too low, the system speeds it up.  As a result, when they idle they make a kind of distinctive sound, speeding up and slowing down.  This video is an old John Deere hit and miss engine.

The two main ways we build engines are either from castings or stock shapes from the foundries.  The generic term for the stock shapes - plates, round bars, square bars and so on - is bar stock.  Castings can be any sort of metal, but most of the time are cast iron. 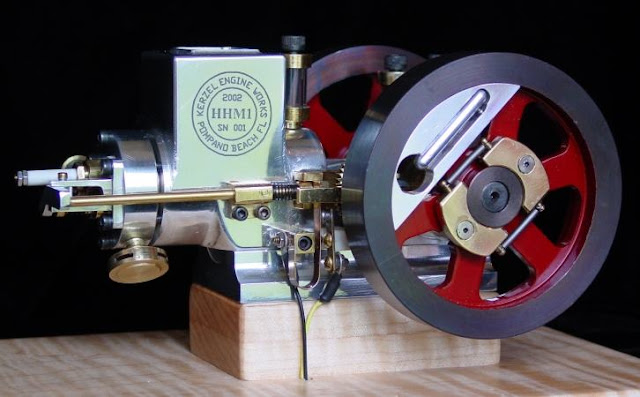 Another interesting version is an engine called the Zero Six; I assume because designer Dario Brisighella designed it in '06. This engine is bigger, with a bore of 1.125” and stroke of 2.00” (2.0 cu. in.) and it's also a bar stock engine.  The flywheels on this one are 6" diameter.  The plans for this engine are available, but I'll have to buy them for $25. This is an example from elsewhere on the web, built by "Jason in the UK". 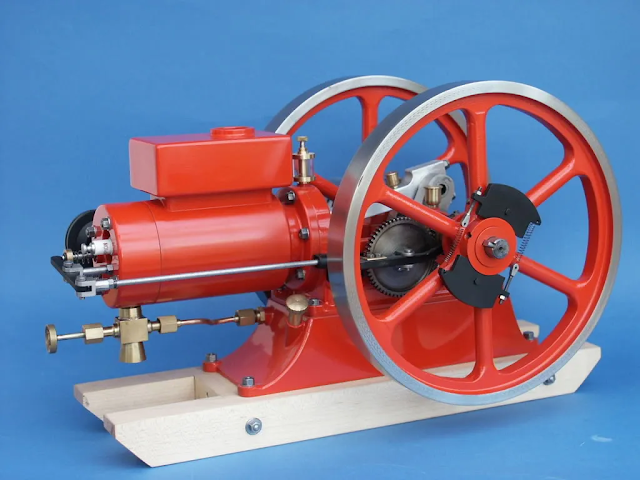 I happen to like the looks of this one better than the Kerzel.  I've seen a couple of them in different color schemes.

At the other extreme is the Bob Shores Little Angel.  This is the smallest hit and miss I've seen, with displacement of a blistering 1/10 of a cubic inch (better anchor the house!).  OK, not quite a full 0.1 cu in; it's .098.  It can be built either from castings or bar stock.  The flywheels are 2.5" diameter. 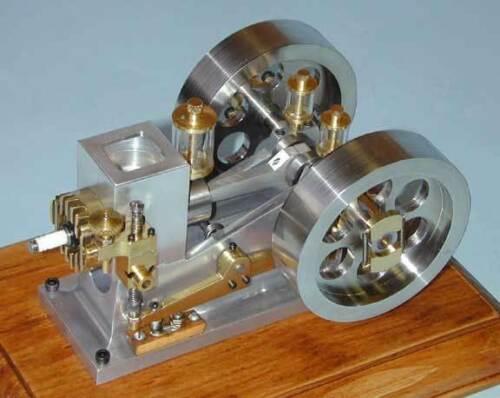 Another popular engine is Jerry Howell's Farm Boy, which is between the Kerzel and '06 in displacement at1.08 cu. in..

The wild card is that any of these engines can be scaled to any size before you cut your fist piece of bar stock - but engines based on castings can't be scaled.  This guy on the net doubled the size of the Little Angel, simply doubling the size of all the parts, and says it runs great. 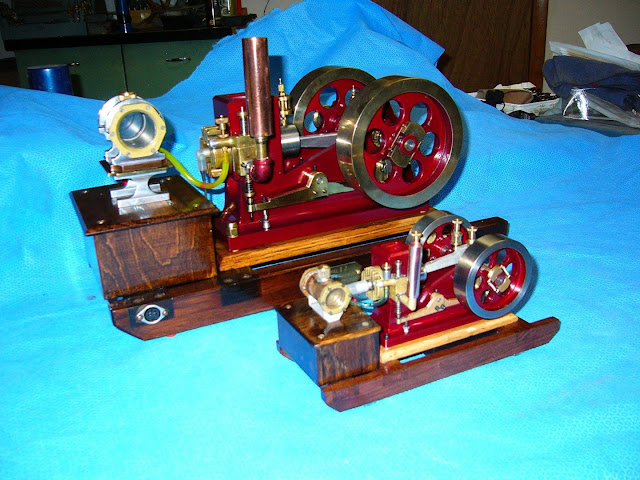 Early on, I said I have the drawings for the Kerzel.  I also have a CAD file of the engine that can be used to generate drawings for the dozens of parts in the engine.  All of which can be scaled by any convenient number.  The Kerzel has a 0.75" diameter piston.  Doubled, that turns to 1.5.  It can be scaled to the same diameter as the '06 using a factor of 1.5 or 3/2.

At this point, I haven't decided if I'm going to scale up the Kerzel or buy the plans for '06.  There's still room for something completely out of the blue to come along, too.