Last Thursday's piece on some of the crap hidden under the name of Covid-19 relief leads naturally to a follow up article today from FEE (the Foundation for Economic Education), featuring a list of the top 20 states getting bailout money from the bill. Let's cut to the chase and post the list, in descending order of amount of bailout money.
To begin with, it's much more widespread than I thought.  I knew about California and New York, but Texas and Florida?  Did you notice #4, Tribal Governments?  Why is this whole list even a thing?  The first thing they tell you, i.e., the first lie is that state incomes were down and they can't meet their expenses.  That's just not true; at least not as bad as they imply.  State revenues were down in the second quarter when the lockdowns were first ordered, but recovered fairly well in the third quarter and weren't down badly for the year.  JP Morgan said state revenue was “virtually flat” in 2020 nationwide while 21 states actually saw slight revenue upticks. 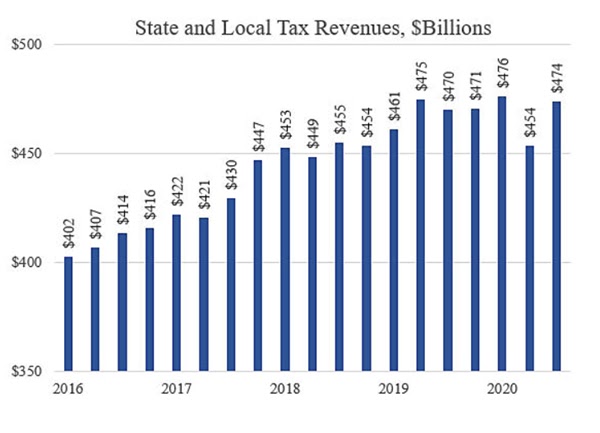 That's telling me the $350 billion dollars was unnecessary spending.  If you assume that the taxpaying population of the US is 125 million people (derived from the USDebtClock) that means every taxpayer pays $2,793 for no apparent reason.  Except that it's never evenly divided; higher income taxpayers pay more, lower income taxpayers pay less.

The context we got before is that "red states are bailing out blue states," but there are red states in there, too.  The ratio favors the blue states, in that 13 of those got bailout money while six red states did.  The Democrats planning the spending package factored in not just population but also the number of unemployed citizens. This had the direct effect of skewing the bailout benefits toward states that enacted harsher lockdowns and punishing states who prioritized preserving economic activity.  It was, in many cases, Republican governors who opted for lighter restrictions and abandoned harsh lockdowns.  In states like this one (Florida), this has averted the unemployment and social destruction other states experienced—without producing noticeably worse COVID deaths.

Perhaps the most incoherent and confusing aspect is that the state getting the biggest bailout, California, says they're running a budget surplus. To quote from FEE:


The only conclusion left to draw, however disappointing, is that Democrats crafted this bailout’s structure to favor states who pursued the COVID-19 policies they agree with—aka, states run by Democrats. Suffice it to say that political favoritism should never determine how limited taxpayer money is spent.

But, unfortunately, cronyism and favoritism are features, not a bug, of big government spending programs. As economist Ludwig von Mises once explained, big government programs concentrate enormous spending power in the hands of a few political officials; all but ensuring that favoritism follows.