Starship Prototype SN11 Is On the Test Stand

SN10 had its flight on Wednesday, a week ago tomorrow, and left a mess after its explosion that was being cleaned up almost instantly.  The expected movement of SN11 to the pad took place yesterday, with Bluto The Crane lifting 11 onto the test stand in the same day.  Getting lifted has always seemed to take at least a couple of days.  As I type this, they appear to be starting a cryogenic test, to ensure everything is good at the temperatures of liquid nitrogen.  This is several days faster than any other vehicle progression into these milestones that I can recall. 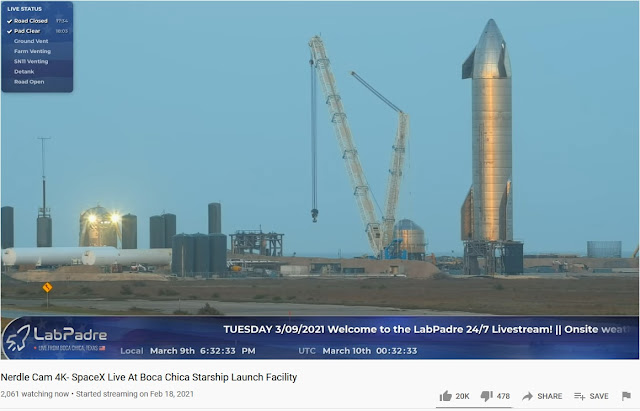 Teslarati today quotes NASA Spaceflight in saying SpaceX wants all the preliminary tests to prepare SN11 for the next 10km test flight to be completed by this weekend.


NASASpaceflight.com reports that SpaceX – already scheduled to transport a new Starship to the launch pad on Monday, March 8th – wants that prototype ready to launch as early as next week.

According to the same report, SpaceX – having already installed three Raptor engines on Starship serial number 11 (SN11) – aims to more or less wrap up all qualification testing by the end of the week. No different than the test campaigns that all other flightworthy Starships had to pass before being cleared for launch, that process includes – at minimum – a good cryogenic proof test and a combined wet dress rehearsal (WDR) and static fire.

Twitter user Boca Charts posted this chart of the time from rollout to liftoff over every prototype that has flown. 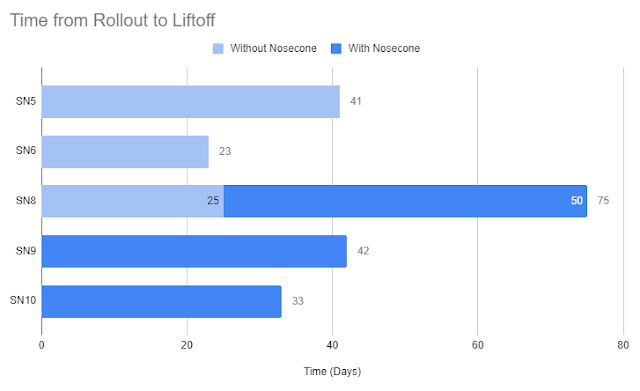 Prototypes 5 and 6 were different; they were before using nosecones and had a 55,000 lb weight on the top to simulate that weight.  Number 8 went through various tests before taking the first 10km flight.  Eileen was slowed down by the incident that gave her that name (leaning into a corner of the highbay) but still almost cut SN8s prep time in half.  SN10 didn't improve the time as much but was slowed down by the Texas freeze for a few days, too.

If you spent the weekend watching the Lab Padre camera feeds you'll know this, but I don't think that's everybody who drops by here.  The Launch Pad camera, Camera 6 went down at some time Friday.  I recall switching to look at the feed and being greeted by a black screen.  I went back in the recording until I saw it running and eventually found a point where it appears a plastic bag goes over the camera.  It stayed that way for a while and then went black.  On Saturday morning, I took a look at the Nerdle feed and saw a front end loader putting a shipping container at a curve in the road to give a view essentially identical to what that camera had the previous day.  Camera 6 was fully back in operation by Sunday afternoon.

As the day went on, it was being shared that the better, more permanent installation was arranged by SpaceX themselves, and in the scrolling text bar Lab Padre thanks Elon Musk personally for helping them.  I find it remarkable that SpaceX puts up with us "tank watchers" watching everything they do live in real time.  The cameras are far enough away that faces aren't recognizable, but we see them working every day.  Rumors spread that Elon uses the cameras and reads the comments himself.  I sure can't verify that, but going out of their way to help restore the camera is a tremendous gesture.