Unfortunately, we don't know what it is just yet.  All we know for sure is what little we've been able to see with our own eyes.  SN11 lifted off from Boca Chica at 8:00 AM CDT, into a dense fog.  SpaceX's video stream, which included the usual photography from cameras around the ship, showed a seemingly normal ascent to 10km (6.2 miles), cutting off engines one at a time while climbing, until it hovered at altitude for a few seconds.  The descent looked normal (although they were losing video regularly) until the engines started up.  This was the last frame update from the vehicle.  As you can see, the mission time was 5:49.  This is 10 to 15 seconds before landing. 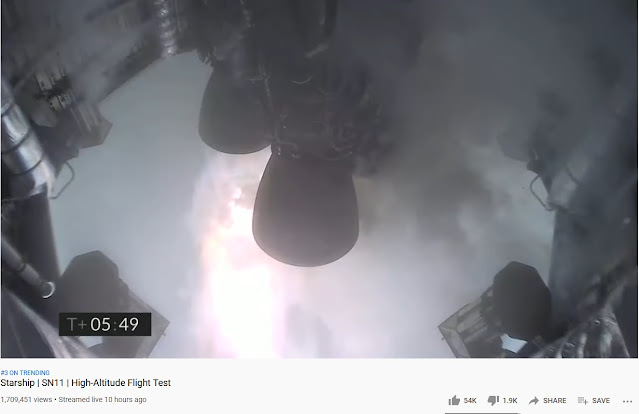 This SpaceX mission video is part of a (much) longer video Everyday Astronaut posted that was live streamed this morning.  I've queued up the video to start around 38 seconds before ignition and liftoff.   Really of note is that there seems to be an explosion coinciding with the ignition moment in the picture above.  He has video of chunks of SN11 falling to the ground and is visibly worried about his cameras, set up where the chunks are falling.   Late this afternoon, Elon tweeted a reply to him saying, "Barely a scratch. :) Back on the stand soon! Will report conclusions as soon as we know them."

Did it explode due to something going on at this instant, or did the FTS (Flight Termination System) detect something so far from normal that it blew the craft?  Wish I could answer that.

I don't think it was the FTS deciding it had to destroy the vehicle.  The FTS system terminates a flight if it goes well off course or shows strong evidence of not being in control.  That takes time and everything was looking pretty normal until it didn't.  This looks to me like an engine explosion, from the things I can see.

As that second to last tweet says, SN15 is a few days away from the test stands to test "hundreds of design improvements" in all aspects of design.  Somewhere in the next couple of weeks, Booster BN1 will be brought to a different test stand for its testing.  In observing how quickly they were pushing to get SN11 ready to fly, I'd been thinking it was almost a formality to get SN11 out of the way and get onto testing 15, but learn as much as possible from 11 while you can.