The Flight of the Smellicopter

An interesting article popped up today in Electronic Design's email news, about navigating micro drones by using a sense of smell. Navigating a drone or some equipment using smell has a lot of practical uses; the obvious one would be looking for a gas leak in a place with natural gas utilities, but there are others, such as the way bloodhounds have long been used for tracking people by scent. What about a missing child? What about environmental hazards, chemical leaks, and other industrial accidents?

The problem with using smell to navigate is that while we do have things that function as synthetic noses, they aren't very good.  (Where's my drummer?  They just don't smell good. (rim shot))  That's why a team led by Ph.D. candidate Melanie Anderson at the University of Washington thought they'd use the smell-sensing antennas of a Manduca sexta moth to produce a drone that they call the Smellicopter.


Why a moth antenna? In addition to sensing wind and vibrations, these fast-responding, highly sensitive transducers capture olfactory information that the insect uses to find food and mates. A sensed odor induces a complex series of chemical reactions, culminating in an “action potential” that propagates down the antenna to the brain of the insect. An electroantennogram (EAG) measures the aggregate electrical activity of the olfactory neurons in an antenna by measuring the voltage drop across the antenna.

“Nature really blows our human-made odor sensors out of the water,” said lead author Melanie Anderson, a UW doctoral student in mechanical engineering. “By using an actual moth antenna with Smellicopter, we’re able to get the best of both worlds: the sensitivity of a biological organism on a robotic platform where we can control its motion.”

That point was amplified by co-author Thomas Daniel, a UW professor of biology who co-supervises Anderson’s doctoral research. He added, “Cells in a moth antenna amplify chemical signals. The moths do it really efficiently—one scent molecule can trigger lots of cellular responses, and that’s the trick. This process is super-efficient, specific, and fast.” 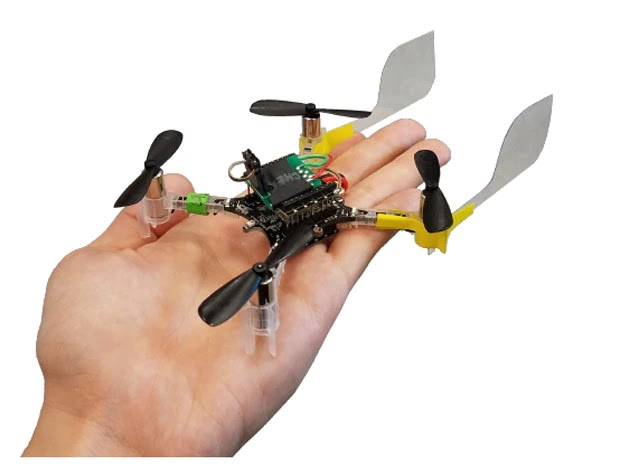 If you hear of the University of Washington being attacked, I wouldn't be surprised if Ms. Anderson's lab at UW were to be set upon by the animal rights people because she's plucking the antennas off live moths for this experiment.  In this photo, the antenna is the little round loop on forward (left) end of the drone.  The moths are put into a refrigerator to anesthetize them before the antenna is plucked off, but there's only two antennae per moth so the moths are either regenerating the antenna or they're sacrificing the moths.

All that aside the way they handle the signals from the moth is plain old analog electronics.  They measure the output of the antennas. Output was between 10 µV and 1 mV in response to stimuli, so they set the gain to 1,000 after some experimentation. The moth's antenna output impedance was high, though, between 500k and 750k ohms (500 and 750,000 ohms), and the system picked up electrical noise too easily.  That was easily solved with an active filter and more amplification - the output stage has a gain of 11.

The drone pictured with the modification for using the moth antennae is a commercial/open source model called the Crazyflie 2 Nanodrone.  Without the antenna sensor (another EAG, or ElectroAntennoGram) it weighs 23 grams.  Once outfitted for their experiments and characterizations, it can fly up to seven minutes on its 250 mAH battery.


It's an interesting article, digging into how the biology department told the mechanical engineers how the moths work their way upwind to the source of a smell, as well as digging into the details of how the engineers have made the drone work.  Biomimetic designs, literally life-copying designs, are becoming a big thing (as was always expected) and this a good look at how it's going on.