OK, A Couple of More Things I Can't Resist Posting

This is an uncommon photo of a fairly common optical illusion.  It's from the Guardian (UK) and was photographed in the UK.  I've seen many photos of the illusion, called Fata Morgana, over the years but not many this good. 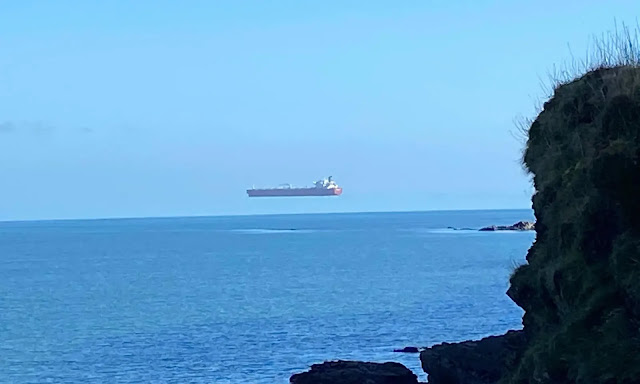 It's caused by a thermal oddity that forms over water (usually).  The air layer immediately over the surface is cold, but it's trapped by a tropospheric duct under warm air and can't rise.  The refractive index changes with the air temperature, and the way light bends makes the ship appear to be in the air.  Except, as I say, images aren't usually this clear.  They often look blobby, and visually farther away, rather than as large and sharp an image as this.  If you embiggen the picture, it almost looks like you can see the keel of the ship - which appears to be a tanker.


The second story is a strange news story on the Blaze news email that caught my eye with the title, "Man goes viral for promoting 'Birds Aren't Real' movement — and insists he's dead serious that government is using fake birds to spy on citizens."  The Blaze piece is based on a Newsweek article and the source article is here.

When dealing with something this bizarre, it's almost mandatory to use the disclaimer, "I swear I'm not making this up."  The guy in question, Peter McIndoe, says that "...between 1959 and 2001, the government killed off all birds and replaced them with surveillance drones," Newsweek reported. The thing I noticed about it is that guy is full of wonderful quotes


"McIndoe portrays the movement as completely serious," Newsweek reported. "Throughout his interview with Newsweek, he remained deadpan and appeared to be improvising as he went along, further blurring the divide between reality and conspiracy. When asked directly whether this is actually an elaborate comedy project, he swore that it's a real thing and that it was just operating underground until the advent of the internet. It should be noted, though, that the only indication that Birds Aren't Real has been around for decades is the history section of its own website."

Newsweek noted that it's worth pointing out that when first speaking with the outlet about setting up an interview, McIndoe texted, "In regards to our movement being a joke, or for real: That is the very question that our post-truth era comedy project thrives within."

During the phone interview, however, McIndoe said, "Whenever I type in, 'Real movement, no comedy involved,' it always autocorrects it to something like 'meta-conspiracy parody-movement, showcasing post-truth-era absurdity."

I don't know much about the guy, but I think I like him.

Newsweek pointed out that at least one "Birds Aren't Real" Instagram account boasts more than 296,000 followers, and a related TikTok account has more than 353,000 followers.  Newsweek reports that there are chapters in several states, and McIndoe claims there are members of the movement living in every state.  And then Newsweek goes on to say, "It's not clear how many of those people are true believers, and how many of them are interpreting the accounts as a joke."

It's as if without someone from the benevolent protective government to tell them the guy is yanking their collective chains, they're incapable of deciding.  It's sorta like an environment a post-truth era comedy project would thrive in. 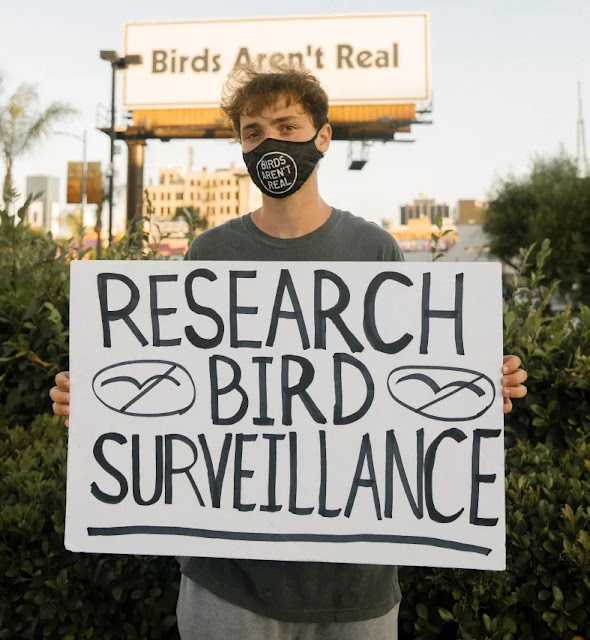