Teslarati news today posts on some post-mortem statements about SN10's explosion that come from Elon Musk via Twitter - as has become somewhat of a tradition.

Starships go through a rather unusual set of maneuvers for a rocket. You've seen the complicated moves; transitioning to horizontal orientation, followed by the aggressive flip to vertical, igniting three engines, then choosing the best two out of three, and eventually landing on the thrust of one engine of the three.


After Starship SN8’s last-second landing failure on December 8th, SpaceX concluded that low pressure in the liquid methane header tank was largely to blame. Normally pressurized with methane gas in a cutting-edge process called autogenous pressurization, SpaceX ultimately seemed to think that that process was the root cause and responded by adding an alternative helium pressurization workaround at the last second. Long-term, helium is not a viable solution as it’s virtually impossible to resupply in-situ (on the fly), meaning that any Starships reliant upon helium would find themselves stranded on the Moon or Mars.

Starship SN9 ultimately failed a few seconds earlier than Starship SN8 when one of its Raptor engines failed to ignite, precluding a true flight test of the helium pressurization fix. As it turns out, Musk believes that that very fix may have doomed Starship SN10. 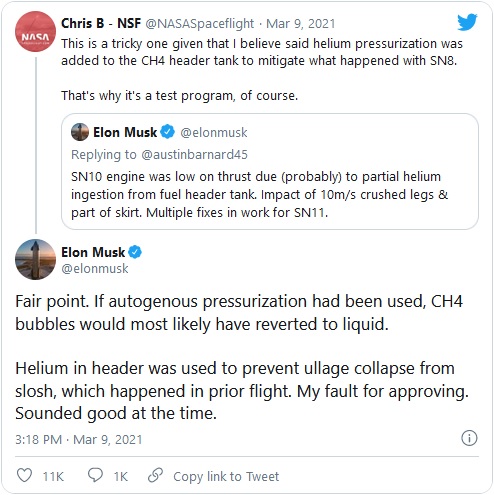 As we noted in the post about Elon saying, "we were too dumb," this is a good example of a good leader.  "My fault for approving.  Sounded good at the time" is exactly what you want to hear when the leader thinks they made a mistake.  I've never worked around anyone worth a shit who thought they knew everything.


As Starship SN10 forged ahead past the points of failure that killed SN8 and SN9, the SpaceX CEO thinks that one or more of the vehicle’s three Raptor engines began to ingest some of that helium pressurant as they emptied their methane header tank. As a result, engine thrust would have dropped below expected values, preventing Starship SN10 from slowing down for a truly soft landing. Instead, the Starship hit the ground traveling a solid 25 mph (~10 m/s), obliterating its tiny landing legs and damaging its skirt section.

As we noted yesterday, SN11 was moved to the pad five days after the test flight, but even with the mere five days, workers had enough time to test the legs, ensuring they all deployed as expected. 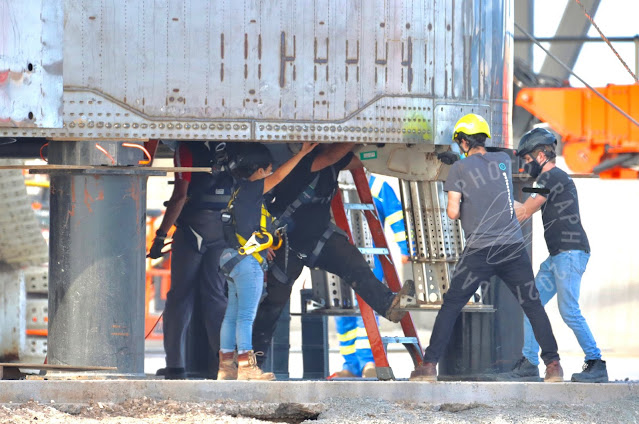 Think of the size for the moment.  A Starship is about 160' tall.  The legs are in the vicinity of four feet tall, full extended.  Assuming the guy in yellow hard hat is close to six feet tall.  Compare the size of the legs on the Falcon 9; a taller vehicle, but 230 feet tall vs. 160.  Assume these guys next to the landing legs are about 6' tall as well.

It’s not completely clear that the hard landing was the sole cause of SN10’s subsequent explosion, but it was very likely a big contributing factor.  As you see in the Scott Manley video from last week, all the videos of the landing appear to show a major fire starting well before touchdown and continuing to burn up to the point of failure.  Think of the collapsed legs as complication, perhaps restricting the ability of water from the deluge system to get where it was needed.

Regardless, Musk says that “multiple fixes” are in work for Starship SN11, which is currently speeding towards a launch attempt perhaps as early as next week.  Last night I was wrong about them doing a Cryogenics test; it was just pressurization with Nitrogen.  They started doing a cryo test today and stopped it for some reason.