A Couple of Things I Couldn't Resist Posting

A couple of small, but fun stories.

The first is a Scott Manley story I came across during the week. When SpaceX launches a Falcon 9 mission, they recover the booster about 9 minutes into the mission. The upper stage that actually deploys the satellites is left in a higher orbit and is currently not considered recoverable. I believe they are put into a destructive de-orbit, using some onboard thrusters or perhaps some residual fuel, so that they reenter the atmosphere and are destroyed. During the couple of days this takes to have its affect, the second stage is still operating on battery power and transmitting telemetry, including video.

It seems a group of hams in Europe figured out how receive the Telemetry and decode the video.


Scott does an OK job of describing what the hams did.  The "gizmo" he mentions at around 3:28 or 3:29 is called a downconverter.  Fundamental, essential technology, and if you have a typical house, you're probably surrounded by half a dozen of them.  In my talk about superheterodyne receivers, every block diagram starts out with a downconverter.

All that aside, it's a fun story.  It comes down to SpaceX using open standards for their telemetry and a bunch of hams willing to try lots of stuff.


NASA has a mission on the planning books called TROPICS - the kind of name which is almost legally required to be an acronym, in this case: Time-Resolved Observations of Precipitation structure and storm Intensity with a Constellation of Smallsats (TROPICS).  It's actually an interesting mission, but that's not tonight's story.

The story is they bid the launch of a handful of cubesats that will conduct the measurements.  the launch is to be in July of 2022.  Three launch suppliers bid the mission.  To tease the story a bit more, here are the three launch vehicles, courtesy of Twitter user SotirisG5.  One of these things is not like the others. 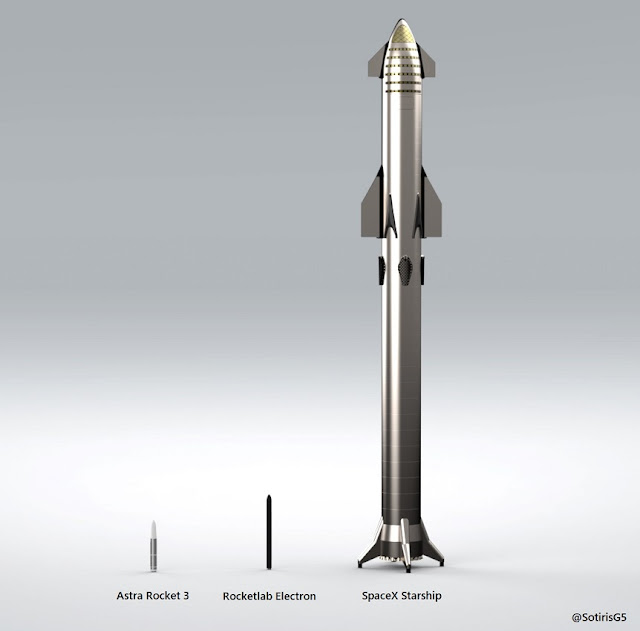 By July of 2022, in time for the TROPICS mission, the Starship and Super Heavy booster might well be fully operational.  If they can launch 220,000 pounds to orbit for $8 million, that's $36.36 per pound or $80/kg.  That's cheaper than the over the counter rates at FedEx's website.  I just asked for the rate to ship 1 pound to Tokyo and fastest delivery was $115.94.  Another Twitter user said that's 1/35 the cost of a Falcon 9 launch.  The potential is there to completely revolutionize commercial space flight.