I'm going to go somewhere I've never gone in ham radio coverage, and talk about something I've never talked about: actually operating your station.   And the reason I'm going to do that is because this weekend features one of a handful of operating events every year that might be fun to listen to and even operate.  Yes, I'm going to talk about contests.

If ham radio has an aspect that's controversial, it's contesting.  People who are anti-contesting and want to get on the air and casually chat with friends or meet people they don't know get upset when a major contest happens and the bands are crowded.  While it's technically true that there are contests going every weekend and sometimes even on weekdays, most of the time you'd never know.  There's really only a handful that are close to taking over the bands.  I've never seen actual statistics, but it seems that the annual ARRL Field Day on the third weekend of June always gets a massive turnout; after that their November sweepstakes is big, and there are two major DX contests; the ARRL's and CQ Magazine's CQ Worldwide DX contest.  Other than Field Day, the other three contests have two weekends each, one for Morse Code (CW) and one for voice (SSB).  If you're counting, that's seven weekends out of the year when you're really likely to hear a contest.  For newbies, DX is said to come from D for Distance and X for unknown, but is generally taken to mean other countries, places or provinces that aren't in your regular operating areas.

The crowding isn't that bad although it is an argument to have a station that is good on more than one band.  All of these contests use the "old" ham radio bands of 80, 40, 20, 15 and 10 meters, leaving 60, 30, 17 and 12 available.  During the contests, most of the bands aren't fully taken over, but there are other places to go.

This weekend is the ARRL International DX Contest, SSB mode (only).  If nothing else, you can tune around the voice sections of the bands and listen to what it's like.  I'll borrow a screen capture from the excellent WA7BNM Contest Calendar (8-Day Calendar View) that displays what you need to know to play in this contest. 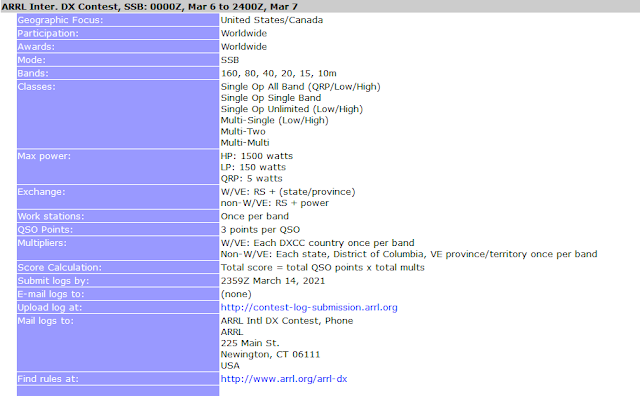 Let's start with the big one: why on earth should anyone care?  Assuming you have no desire to enter the contest and try to run up a score, I see two reasons.  First and foremost is to have fun.  DX contests bring stations from all over the world onto the air to compete to be the best in the different classes or (less formally) best in their country.  They also bring a ton of guys with smaller stations who are there to work more countries for their own interest or entertainment.  For people who don't strive to work other countries, there's a persistent image of straining to hear weak stations and the farther away they are the weaker.  While it does happen, I can't begin to tell you how many times I've heard people surprised at how loud and easy many of their DX contacts are.

A more pragmatic reason is that it's good training for operating in bad, crowded conditions.  Much like disaster communications, the messages are few and you have a pretty good idea what you're going to hear.  In this contest, you'll tell each other a signal report (you can get strange reactions if you say anything other than "five nine") and either your state or province (if you're in Canada) or the operating power if you're in another country.


Are these Q signal abbreviations familiar? Need a refresher (pdf warning)?  Simply: QSL? (as a question) means, "do you confirm reception?" and without the question mark means, "I confirm copying."  QRZ? means, "who is calling me?" and is used to ask if someone else was responding to his CQ (calling any/all stations).

Let me throw in another reason to play in the contest.  The contest started Friday night at midnight UTC - that's 7:00 PM EST and 4:00 PM Pacific.  It will end at midnight UTC Sunday night.  That means the first 24 hours of the contest are gone already.  It also means for the stations that are working everyone they can hear, contacts are getting harder to come by.  That, in turn, means they'll listen harder for you and will be just as happy to give you a contact as to get one themselves.

Contests are actually facing difficult times in keeping going.  Big contests like this bring a handful of really "big gun" stations, who have sunk astonishing amounts of money into their efforts.  They compete in the class called Multi-Multi, which means multiple stations on the air and multiple people operating.  The problem is that the financial investment is so huge that new stations are exceptionally hard to get started.  Many contests, like this one, have entry categories aimed at the little guy.  Single operator single band, single operator low power, single operator all band are examples.  I recall one contest (CQWW, I think) that has a category for people with small antenna systems, something "wire antenna and tribander" is the class.

I bet nobody expected me to talk about this.  The least technical aspect of radio - operating.