The Other Milestone Yesterday

AFAIK, there has been virtually no general media coverage of this factoid.  After the SLS static fire yesterday, NASA Spaceflight (dot com) switched over to something happening at SpaceX Boca Chica.  SpaceX completed the stacking of the first Super Heavy booster.  The prototype has been in the works quite a while, and is referred to as Super Heavy BN1 (Booster Number 1).  This will eventually be the most powerful rocket in the world. 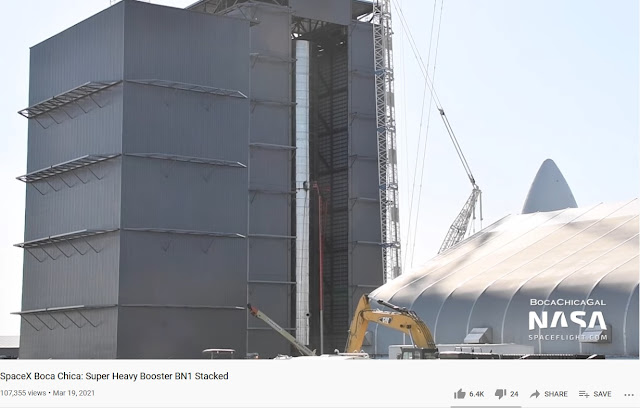 Video here: I screen captured it before the top tank was fully in place; you can see a slightly darker (thicker) line right about the halfway up point where the cherry picker bucket is sitting.  A group of guys got out of the bucket and went inside the bottom section (the methane tank).  The process was interesting to watch.  Bluto the Crane lifted the top section (the LOX tank) until it cleared the bottom tank, which was over on the left in this view, then the bottom tank was rolled under the upper.  The upper tank was then lowered gradually while the guys inside the tank lined things up.

There's still days of work to be finished: they need to weld the two tanks together, and connect their preinstalled plumbing and avionics runs.  Comprised of 36 of the steel rings also used to assemble Starships, the first Super Heavy prototype will stand roughly 70 meters (230 ft) tall from the top of its uppermost ring to the tail of its soon-to-be-installed Raptor engines.

Something that always puzzled me is that when they built the high bay and I found about its size, I realized it's too short to put a Starship prototype on the top of a Super Heavy booster.  I don't know if there are plans to make the high bay taller, but a Starship prototype like SN11 is 160 feet tall, and this SpaceX page says the stack of Starship and Super Heavy will be 394 feet.

BN1 will not fly; it will be subject to all the static tests we've come to be used to and probably more.  It will be pressurized, and subjected to cryogenic temperature fluids like those it will carry.  At some point, the vehicle will get the four raptors it can accommodate.  The full payload-capable Super Heavy boosters will have 28 Raptors and there will be more on the Starship than the three engines the Starship prototypes have carried.  For test hops of the BN2 and perhaps BN3, they will apparently have four Raptors.  It's hard to keep up with these guys.

All of this is in preparation for a Starship Super Heavy orbital launch this summer.


First reported by NASASpaceflight and later confirmed by Musk himself, SpaceX hopes to be ready to begin orbital Starship launches as early as July 2021, just four months from now. Per NASASpaceflight, that first launch attempt will nominally use Super Heavy booster BN3 and Starship SN20. Super Heavy BN1 is expected to remain grounded, serving as a testbed for inaugural pressure and proof tests, as well as one or several possible Raptor static fires (Update: confirmed by Musk).

If that process goes according to plan, Super Heavy BN2 will pick up where BN1 leaves off and attempt at least one short hop test, among other qualification tasks. In the interim between that feat and Super Heavy BN3’s launch preparations, it’s safe to assume that either BN2 or BN3 will support some kind of iterative static fire test campaign similar to what SpaceX once did with Falcon 9, gradually building up from tests with a half-dozen or so engines to static fires with 20 or more – possibly up to and including a full complement of 28 Raptors. 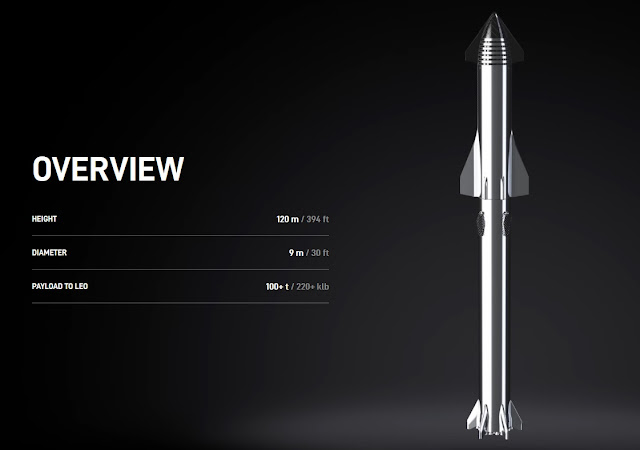 From the SpaceX Starship page.