SN10 Sticks the Landing ... and Then Explodes

It was a long day of waiting for the test flight. At around 3PM Eastern, they counted down to zero, and ignited the engines which were immediately shut down in an automatic abort. After some analysis of all the data from the rocket, they decided they'd reset everything and start over. Musk later explained that the three Raptors were producing too much thrust and they could fix that.

Number 10 ended up launching at 6:14PM EST, proceeding through the mission profile we've become familiar with - starting out on three engines, then sequentially shutting down two out of the three engines during ascent to hit the ~10km altitude (~6 miles) to keep from going supersonic.  After hovering at 10km for several seconds, they shut down the one remaining engine that was burning and began the guided belly flop down to about 1km. This is where the difference showed up as all three raptors successfully restarted; then one shutdown followed shortly by a second shutting down and the Starship successfully touching down with one engine burning.  When the dust and exhaust cleared, SN10 was standing there proudly. 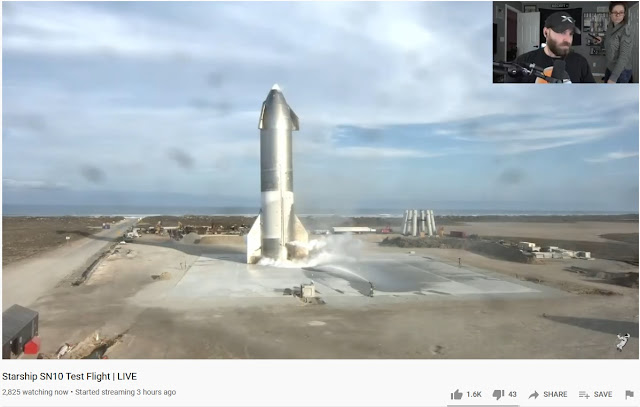 This view was on a channel I don't ordinarily watch, but he had a link to the SpaceX livestream that I couldn't find elsewhere.  The Lab Padre Nerdle cam can't track the flight properly.

Being just after 6PM and during dinner, I didn't just sit and watch SN10 standing there, I went back to dinner and watching a little news commentary on TV.  When I came back, she wasn't still standing there, just ominous smoke.  Backtracking to 5:21 CST on the tape showed the landing, and fast forwarding about 8 minutes revealed that SN10 suddenly blew up, going eventually out of the frame, around 300 feet above ground. 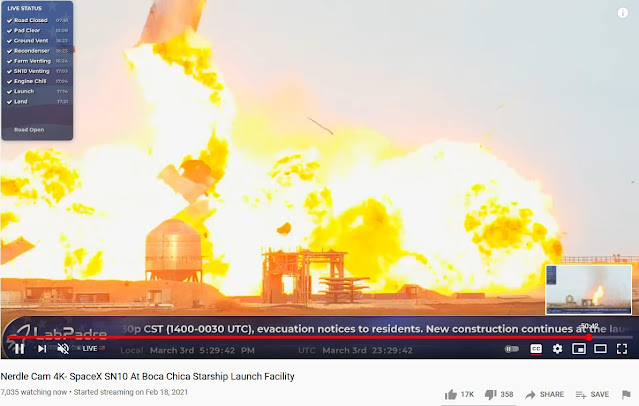 Why?  If you watch the SpaceX video, which cuts off soon after the successful landing, you can see that the vehicle lands hard - a bounce is visible.  Look for more videos in the next couple of days.  In the videos I watched, a fire is visible at the base of the SN10 right after shutdown.  One of the explanations is that the fire spread.  In one view, the rocket looked slightly tilted.  I don't think there has been a landing on the stubby little landing legs these prototypes have that didn't result in some legs breaking and introducing some tilt.  In another view, SN10 appeared to have no more than a few inches to a foot of clearance between its aft skirt and the concrete pad.

Quite a while ago, Musk had said that they were going to upgrade the legs on Starship to something more reminiscent of the Falcon 9.  The tilt we've seen in SN5 and SN6 after their hops, and apparently on Starship SN9 as well is due to compressing the legs to the point that they break a crumple zone on the legs.  The Falcon 9 also has legs that collapse if they land too hard and it happens with some regularity, but whatever the solution, Starship's legs are comically short and don't offer any shock absorption.  There was talk a month or two ago of scrapping any prototypes between 10 and 15, and just going to SN15 because it has a much evolved design.  Apparently they actually did scrap out 12 to 14.  Today we heard about SN11 being moved to the pad for the next Starship test flight.  Maybe they should jump to SN15 now?

All that said, assuming the problem was from a fire which, in turn, was from landing hard because of the known leg problems, it really can't diminish the fact that today was a turning point in Starship design.  It was day of extraordinary success for SpaceX.