This Thursday, March 18, NASA's Artemis program has scheduled the re-test of the Space Launch System (SLS) core stage, the test they call the Green Run, to qualify the vehicle for its first unmanned test flight.  The test will be at Stennis Space Center in Mississippi.  This re-test is due to the problem they had with the first test in January, when the vehicle software aborted the test at 67 seconds into a targeted 480 second test.  I wish them luck in their test.  Better yet, I wish them absolutely rock hard competency, something that seems to have been missing.

It's interesting that word is leaking out in advance of this test that the new Biden administration has begun a study of the affordability of the program and whether or not to continue it.  The analysis is being led by Paul McConnaughey, a former deputy center director of NASA's Marshall Space Flight Center in Huntsville, as well as its chief engineer.  McConnaughey is working under Kathy Lueders, NASA's chief of human spaceflight, whose last job was directing the commercial/NASA partnership that's approaching the one year anniversary of the first commercially conducted manned launch.

The SLS rocket program has been managed by Marshall for more than a decade. Critics have derided it as a "jobs program" intended to retain employees at key centers, such as Alabama-based Marshall, as well as those at primary contractors such as Boeing, Northrop Grumman, and Aerojet Rocketdyne. Such criticism has been bolstered by frequent schedule delays—the SLS was originally due to launch in 2016, and the rocket will now launch no sooner than 2022—as well as cost overruns.

For now, costs seem to be the driving factor behind the White House's concerns. With a maximum cadence of one launch per year, the SLS rocket is expected to cost more than $2 billion per flight, and that is on top of the $20 billion NASA has already spent developing the vehicle and its ground systems. Some of the incoming officials do not believe the Artemis Moon Program is sustainable with such launch costs.

I know I've quoted a lot of these facts before but the prices of the SLS are stunning.  The SLS is using 4 of the Space Shuttle Main Engines, the RS-25.  These are excellent engines and probably have the most thorough documentation of their history of any rocket engine, an engine so good it has been called the Ferrari of rocket engines.  I'm not knocking the SSMEs.  The problem though, is these engine have been costed out at $146 Million a piece, or just shy of $600 million for the engines alone on one flight.  Engines that will be thrown in the Atlantic when the core stage is done.  When Rocketdyne was selling them to the Shuttle program they were $40 million as reusable engines.

$146 million for the engines alone is similar to the price of a mission on a Falcon Heavy with reused boosters.  Powered by the smaller and less powerful Merlin 1D engines, the Falcon Heavy has two-thirds the lift capacity of the Space Launch System at one-twentieth the price.

These are the kinds of things that the NASA study will be facing.  Even before the study's initiation, Study Lead McConnaughey had been pushing for the SLS program to become more cost-effective. One goal of this analysis is to find ways for the large NASA rocket to compete effectively with privately developed rockets as part of the agency's Artemis Moon program.

The real wild card here is Starship.  SpaceX is continuing the Starship Launch System test campaign, as we talk about regularly.  SpaceX has said they intend to make its first orbital flight by July 1 of this year; that may be Elon Standard Time, but it seems likely it could be between July and the end of the year.  This is a launch vehicle that could potentially out-lift the SLS rocket, be reusable, and cost a fraction of the price. If SpaceX succeeds in getting Starship into orbit, how could NASA justify continuing government subsidization of the less capable SLS booster, which is expendable and costs much, much more.

Of course the main contractors on SLS don't believe SpaceX can do it.  To me, there doesn't seem to be much profit in betting that SpaceX can't accomplish things they say they will. 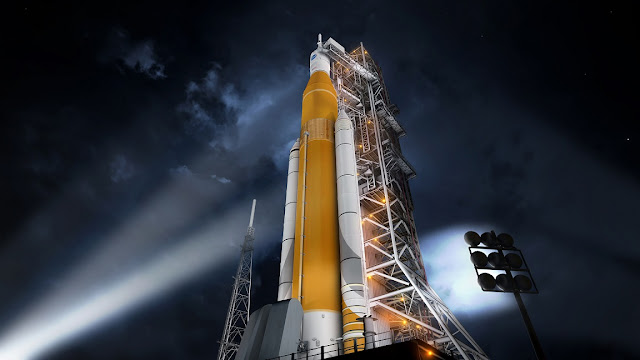