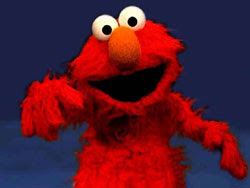 Last night, as I was posting that link to the "Elmo is totally buffered out" video, I originally was thinking of writing something about how bad a Fed.gov internet would be.  I had a hard time organizing thoughts, but after sleeping on it, it occurred to me that I don't really need to do that with the readership I get.  You get it.  But I thought I'd provide a few links for newcomers or those that aren't really familiar with the players.

The guy with Elmo in first part of that video is FCC Chairman Julius Genachowski.  Genachowski appears to be heavily influenced by self-described Marxist Robert McChesney and his organization Free Press.  Like most Marxist organizations, Free  Press is dedicated to the exact opposite of what its name implies; they want government owned press.  Think Pravda and Izvestia of the old Soviet Union and you're right there.  They have been working the regulatory agencies, both the FTC and the FCC, toward those ends.  Here are some choice McChesney quotes, from that "Daily Caller" Story.


“Only government can implement policies and subsidies to provide an institutional framework for quality journalism.”


“The news is not a commercial product. It is a public good, necessary for a self-governing society. Once we accept this, we can talk about the kind of media policies and subsidies we want.”

“In the end, there is no real answer but to remove brick-by-brick the capitalist system itself, rebuilding the entire society on socialist principles.”

It's definitely worth reading completely.  The FTC proposals released in June caught attention for special taxes on news aggregation sites like the Drudge Report, but not so much attention was given to plans to keep struggling news companies afloat with direct tax subsidies. By the way, Free Press is funded by George Soros and the Joyce Foundation, proving yet again that if you find anything evil in the US today, it's within a couple of degrees of separation from George Soros.

So how do I know Chairman Genachowski is "down with all that"?  That's a bit harder to answer.  We know that he hired his press secretary, Jen Howard, from Free Press and that except for some minor disagreements the FCC and Free Press seem tight with each other.  For all I can tell, the disagreements may be just for show:  Genachowski had some meetings to give the appearance of listening to ISPs and Free Press put out a press release to give the appearance of being mad about that.  Finally, if he wasn't completely in line with the President's wishes, I'm sure he'd be long gone.

Genachowski is a tough bird for me to place.  He's a long time friend of the President, worked on his campaign in '08, and appears to be affiliated with McChesney and other communists, but I can't tell if he actually was a member of Free Press.  He appointed a staffer named Stuart Benjamin, apparently a Duke University lawyer, who is interested in destroying broadcasting.  Seriously.  His idea is to increase the regulatory costs so much that broadcasters shut down.  Once that happens, they'll auction off the spectrum to (I assume) companies who will pay a ton of cash into the US Treasury.  The destruction of a free broadcast media would destroy free speech, but many of the current FCC - and, indeed, the entire administration - are not fond of free speech or anything else about the constitution.

Like the Department of Education and the EPA, the FCC is ripe to shut down.  They are a useless agency, a shadow of the pioneers they were in the early days of radio.  While there are still some sharp people there, they are masked by layers of idiotic bureaucrats.  When the technical folks couldn't stop the almost criminally insane Broadband over Power Lines law from a few years ago, it was obvious that the technical aspects of radio meant nothing in the FCC.  They have outlived their usefulness.