First, though, the nature of  blogging is that if you read from the top down, you get the  ideas in the opposite order of which they are intended.  If you don't read this blog everyday (and I think Mrs Graybeard and I are the only ones who can say that we do), or if you come across these posts in 3 weeks or 3 years, you don't see that the natural order for these pieces is

While the problem can be a big one, I firmly believe it can be handled.  I'm definitely not the type of person who throws up their hands and surrenders to this sort of problem, and I don't think the self-reliant culture would even think of that.  Military systems that must tune very wide frequency ranges almost instantly, while being available 24/7/365, have different problems than homeowners looking for communications around their ranches or amateur emergency communications (EMCOMM).  For the hams, and others who rely on radio links, doing some circuit simulations and some more pondering on EMP has led me to some simple conclusions.

Back to the root of the problem.  The FFT of a brief pulse is broadband energy.  That means the energy from the EMP pulse is spread out from DC to VHF.  The source I started with says that you're down to 1% of the field by the time you reach 240 MHz.  That means if you're planning the communications for your retreat or other post-SHTF situation, you can simply use UHF; either FRS radios or 440 MHz ham radios for more power, range and privacy.  I pointed out in the first piece that narrowband circuits and small antennas help prevent damage, and that the received voltage goes up with the bandwidth of the antenna.  I've simulated a lot of the results with LTSpice.  If you're a hobbyist, you should have this program.  It's free, it's easy to use, and it's as accurate as any of the commercial SPICE simulators because it uses the same "engine".  We use it at work all the time and I know we are one of thousands of companies using it.

Here's a typical problem.  I have a radio I intend to use as my main post-SHTF communications.  It covers lots of bandwidth, and I want to see how much effect the EMP will have on it.  I built a simulation that puts out 50,000V at 10,000A with a 3ns rise time.  I put a simple blocking capacitor in line with the antenna and find it offers almost no protection.  So I add a couple of zener diodes as clamps (very commonly used in lightning protection, where they are sold as Transient Voltage Suppressors).  A pair of 1N751 zener diodes, which almost every hobbyist has seen as a 5V regulator, limits the peak dramatically: it's over 550 V, instead of 50,000.  The pulse is still short - no part of the circuitry acts to spread it out - but the energy has been reduced tremendously  (the energy is ½ * V^2*t^2).  An unmodified commercial radio will probably survive this, depending on design.

Let's say I want to reduce it further.  A simple single inductor, single capacitor 50 MHz highpass filter reduces the voltage by a factor of 10, with a peak of 74 V. 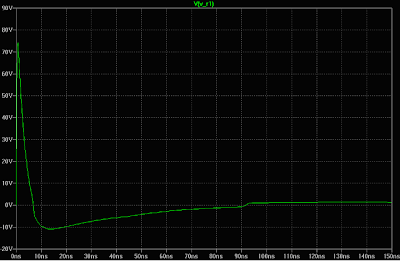 A commercial radio will probably survive this.  This will allow the radio to be used from 50 MHz to the top of its range.  Now, I know I said the bandwidth of the radio helps reduce the results of the EMP, and a small antenna helps.  The point of this exercise is that the filter protects the radio no matter what antenna is attached!  I don't think you need this with the typical short rubber duck antenna that is standard on a handie-talkie, but this makes it safe no matter what.  Here's the circuit: you could build this in a small metal box and connect it between the outside antenna and the radio.  Follow good VHF or UHF practices. You don't need extremely high voltage capacitors, but physically larger parts have better surge absorbing ability than the tiny surface mount parts in cell phones.

For lower frequency work, like the HF bands, I believe bandpass filters are the answer.  Let's take the same basic approach and build a simple 14 MHz bandpass filter.  I'll make it center frequency of 14.150 MHz, with a bandwidth of 400 kHz, to make sure I pass the desired band.  This is what the front end of the radio sees. 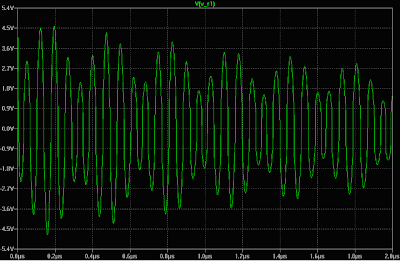 You will probably notice something interesting going on here: the single sharp pulse has been transformed by the circuit to an amplitude modulated signal decaying in voltage.  The "carrier" (high frequency) is the center frequency of the filter and the lower frequency is the filter's bandwidth.

A simple filter like this one could be put in the antenna line of any radio tuned to 20m, attached to any high gain, high bandwidth antenna.  The filter will have to be changed for any band you're operating, so you'll need several filters and switches, cables, all that stuff.  Is that a hardship?  To borrow an overused phrase, "I report, you decide".  Leave it in place while transmitting, and build it from suitably high voltage capacitors (500V is plenty for a 100W rig).  By the way, another advantage of this is that the filter will reject lightning. 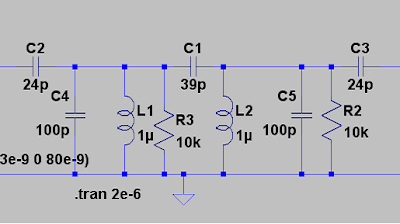 I have done some simulation of a 14 to 30 MHz BP filter, like you might use with a 5 band beam or log periodic antenna. Many hams have small beam antennas like this, and a filter like this would eliminate band switching filters.  The results are very promising.  I am trying to look at "typical" amateur stations as I know them: simple wire antennas, loaded verticals and modest directional beams.  I am very hopeful that this will work.

It seems that everything I look at shows me filtering is a sound approach, and that makes sense.  After all, if the problem is broadband energy, get rid of as much of it as you can.  This could extend down to powerlines.  Powerlines don't only carry their AC line frequency (i.e.,60 Hz here in the US); they carry various data services used by the power companies and others.  A lowpass filter that cuts off reasonably close to the powerline frequency would remove virtually all of the EMP energy, but take the data services out as well.  It seems the networks would get complicated, but I believe it could be done.  The physical size of the components required intimidates me, but those guys work with it all the time.  It would be cool to get a power engineer to comment on how feasible it is.

Do you have a backup generator?  We need to develop ways to protect them, so that if the grid fails, it doesn't conduct EMP into the generators and destroy them.  I haven't worked this out, yet.

Commercial aircraft are tested with lightning simulations based on measurements of actual lightning strikes measured.  The parts of the circuit that are exposed to the outside world get tested to much higher levels than internal control lines, but tests to thousands of volts and thousands of amps are routine.  Radios play through a lightning strike on the antenna port (there is, of course, a nasty static crash).  The main approaches to lightning design are to shunt the stroke to ground when possible, and filter as much as you can.  We use spark gaps, or gas discharge tubes as one layer of protection, but EMP is too fast for this.  Gas discharge tubes take much too long to ionize and fire, so the EMP will blast through before they can do anything.  Filters, though, are still a good fix.  Again, the problem is to filter out the EMP without destroying signals you're trying to hear.

How do I handle this?  My ham antennas are grounded unless I'm using them.  The "big radios" have dual antenna switches, both switches are grounded.  The VHF ground is the large metal chunk that everything sits on (aka - a desk).  The lower frequency grounds extend outdoors to a large system of ground rods and even radial wires buried an inch or so into the yard.  My small radios (HTs) are just sitting around.  I don't expect to have an issue with them.

You may have noticed that at no point did I ever say I promise/swear/guarantee that what I'm saying will work and protect your gear.  It's not that I'm mealy mouthed; I just don't have the ability to run simulated EMP tests, so this is all based on a mixture of theory, calculations, simulations (which are theory and calculation) and what we call "engineering judgment".  I am not afraid to put my money where my mouth is, and treat my radios this way, but I hope we never need to find out if our radios survive an EMP.

Edit: right after posting a word magically disappeared in my flawless text.
Posted by SiGraybeard at 10:23 PM