Why Do We Have an Immigration Problem?

The obvious answer is that someone wants one.  Is it a simple project to get more fraudulent voters?  Undocumented Democrats, as they say?  Or does it go farther?  Is it simply that strawberries or tomatoes are so fragile that they must be picked by delicate hand pickers?

Let me show you something. 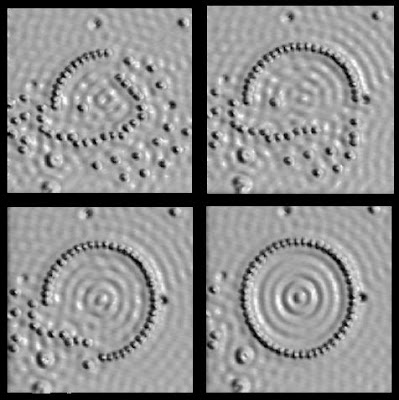 This four panel photograph shows individual iron atoms being formed into a corral on a copper surface, by experimenters at IBM's Almeda Research Facility.  From the photo set IBM Celebrates 20 Years of Moving Atoms, hosted on Picasaweb. Notice the ripples inside the ring, and how it changes shape?  That's the cloud of easily movable electrons in the copper atoms of the surface.

If you can move individual atoms, do you really think it's impossible to make a machine that can move individual tomatoes?  "No, but that's different", you say?  I disagree.  I have had the privilege of working with great engineering minds for many years and I guarantee that if you place a challenge in front of them and an economic prize for beating that challenge, the problem will be solved.

The fact is, the US is way behind in the mechanization of farm harvesting.  I have read comments like this one many times:


"…the US is woefully behind on even regular mechanical harvesting technology. That's because the United Farm Workers union sued the federal government to stop all research into harvest mechanization at any university receiving federal funds in 1978, and won. The most sophisticated harvesting machines now come from Europe where harvest mechanization has long been a necessity. Slowly but surely, US farmers are starting to buy these machines -- but it's an industrial sector that the US could have established itself in 30 years ago if it hadn't been for the sainted UFW and its need to continue importing Mexican union members."


Come to think of it, it is time to (accurately) smear the unskilled immigrant lobbies as luddites and technophobes. They want a future with a permanent underclass picking fruit. Little brown people will always clean the floors and wash the dishes. What a progressive vision: replace your washing machine with a Mexican!

Yet another gift from Jimmy Carter's administration.  Let's see - they gave us the Community Reinvestment Act that led inexorably to the mortgage crisis and economic collapse of 2008, and the UFW union keeping us from freeing people from menial labor and lowering the cost of food for everyone.  Carter's administration was a great time, wasn't it?

Those of us on the Right, who are opposed to illegal immigration see it as modern day slavery: morally and ethically completely abhorrent.  Strangely, we're opposed by people who are supposed to be advocates for individual rights.  The right to be a slave?  If you're going to pipe up with "but we're a nation of immigrants" - shut the pie hole.  Isn't every nation a "nation of immigrants"?  I'm second generation American, grandson of immigrants from two countries.

Just like other cases of slavery throughout history, the slave owners are the real problem, and I'll include companies that hire them as well as the incredibly corrupt, failed narco-state that is Mexico.  If they were a functioning country, they would not drive their citizens across the border to eek out a living.

So why do we have an immigration problem?  Someone wants it.  The Mexican government wants it for the money the illegals send home, the corporations want it, the US government wants it for tax revenue and the bleeding hearts want it, so they can pretend to stand up for the slaves while maintaining the systems that sustain the slavery.  The immigrants are being played like the ball in a game of dodge ball.
Posted by SiGraybeard at 11:27 PM