This is a really hard thing to say, but I have come to the conclusion that economic collapse is inevitable as long as we continue on our current path.  When economies collapse, the host governments typically follow.  What replaces the collapsed government is usually a period of anarchy, from which "the meanest son of a bitch in the valley" emerges as the new leader.

The options for who takes over are two breeds of bad guys and the Freedom force who wants to re-establish constitutional rule of law.  The bad guys (as I see it) are the Marxists and One-World Government types who have been trying to establish global socialism for a long time and the Islamists who are trying to establish Sharia'h law everywhere in the world.  While they are essentially aligned right now, because they both see the end of the US as in their best interest, when real fighting starts, expect them to go at each other.  I can't imagine how the Islamists can align themselves with real atheists, and those who endorse or even favor homosexuality.  If you want to determine which of those are the most ruthless fighters, it's hard to predict.  No one doubts the Jihadis are mean fighters, but the communists did kill off almost 100 million people in the 20th century.  The good guys may be able to minimize their own casualties by working the two bad sides against each other.

When I speak about One-World Government types, I'm including our current administration, many of whom advocate Maoist or Marxist ideals, and are on record wanting to "de-develop" the US.  It is possible that the administration has acted to put a structure in place to catch the collapsing US Fed.gov and replace it with a command economy.  The simple act of rolling the tanks around the White House and declaring martial law would do this.

Borepatch has an excellent article today:  The Panic of 1873 2011 that can give some additional insights.  Borepatch had a minor in history in college; I couldn't get away from history classes fast enough.  Believe him over me.


That said, I'm more optimistic for the USA than for Europe.  We already have a million people taking to the streets in a populist revolt against the clueless governing class.  There's at least a chance that today's Tea Party movement - the people who clean up their own trash after their rallies on the Washington Mall - will deal with this in the ballot box.

The sentiment that we're not voting our way out of this is so widespread that it hardly needs mention here.  Our country is running around 12% of GDP as deficits, beyond the historical collapse point of other countries (typically 10-11%).  Denninger shows this graph of deficit growth since 1993.  See "unsustainable". 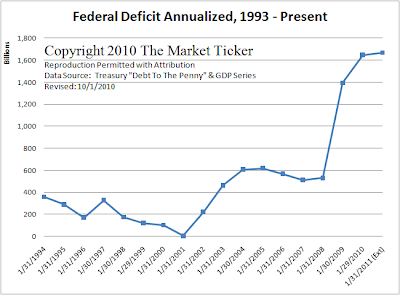 This week has been a parade of news on things that just can't end well.  Earlier this week, it was leaked that Bernanke is trying to create inflation.  That means Zimbabwe/Weimar style hyperinflation and all the horrible things that follow from it are much more likely, and if you're a saver, they are going to kill you.  You're just collateral damage - so sorry, but if you're going to make an omelet, you have to break a few eggs.  The Fed is fighting the bond market.  No institution, no matter how big, and no matter how powerful, can fight the world market.  They are dooming us all.  Make sure you remember this guy, William Dudley, the head of the New York Federal Reserve Bank, who wants to dump more stimulus into the economy and run that deficit spike even higher.
The hardest part is trying to determine when the collapse could happen.  A good sign that it is happening is to watch the daily price of gold.  If gold starts going up a lot, like 10 or 20% in a day, it's over.  A warning sign, that would probably not give you enough time, would be if someone like George Soros holds a press conference to say he has lost faith in the US dollar and is moving his assets elsewhere.
If you're a new visitor here - my traffic has been up quite a bit since my long article on the overgrowth of governments and regulation - you can read more about the professional opinions I've based this on by reading the series, "About That Whole Global Economic Collapse Thingy" in six parts.  Just use the Google search feature at top right.  Part 6 is below a couple of weeks, but on this page.


Finally, blogging is likely to be spotty for the next few days to a week.  I have to take a business trip far from Castle Graybeard, and I won't know how good the connections are until I get there.
Posted by SiGraybeard at 9:29 PM