Inflation to Get a Boost

Last Friday, Chairman Ben Bernanke of the Federal Reserve Bank, made a very important speech.  More so than his typical speech.  It should be clear to anyone that all attempts to stop the current depression have failed.  We have unemployment on the national level of nearly 20%, when all discouraged job-seekers are counted, and the numbers are counted as they historically have been kept.  Shadowstats uses an algorithm like this and argues that the real national unemployment rate is around 22%.  In this plot, the red trace is the one you hear about on the news; the gray plot is the broadest measure of unemployment, and the dark blue is the best guess taking all of the known corrections and omissions out.  In places, this number must exceed 30%.  I'm hesitant to say much higher, but there are tent cities many places in America.

So since the Fed has been running essentially zero interest rate since 2008, and that has only allowed the well-connected to borrow money for free and speculate with it, what can Helicopter Ben do?

Well, fire up the helicopter and drop more money.  Ben says inflation is too low.  The official inflation number is close to zero.  Unfortunately, the Consumer Price Index does not include food and energy in it's "core inflation" that's reported.  Howard Ruff reports the following:

Remember the AOL Finance article I reported here about two months ago that said:


...(at Walmart) the price of a 32-ounce bottle of Windex household cleaner jumped 50%, a 12-ounce box of Quaker Oats instant grits climbed 65% and a 50-ounce container of Tide detergent rose by more than 50%

Inflation is what we expect from keeping rates low and creating money out of thin air, and we see inflation.  You can expect your grocery bill to be going up in the range of those numbers Ruff gives.  Everything is going to get much more expensive.  You will note that the reports earlier this week that social security was not going to pay a cost of living adjustment because inflation is so low.  How long before we see seniors starving?  How long until grandma and grandpa go dumpster diving?

Nevertheless, the Fed says we need inflation now, so he's going to devalue the money supply some more.  His idea is to get you to go buy something before your money becomes worthless.   I don't understand why those highly exalted Ph.D.s at the Fed can never see step 2.  OK- so we go spend our savings; then what?  We buy a car or a TV or a refrigerator; then what?  Then we're in worse shape than we are now.  If nothing else, we create a short term bubble and long term price crisis like "Cash for Clunkers" did.  And Helicopter Ben is going to maintain the zero percent interest rates, because if the rates go up, the Federal.budget line item for interest on the debt goes up, and we have to sell more bonds.   Here's the thing.  Everyone knows we're doing this.  Everyone who owns dollars knows they're going to be worth less and less until they're worthless.  So they'll stop buying bonds at the current interest rate.

Over at the Economic Collapse blog, they make a good argument that this is just to bail out the bankers without saying the words "bail out".  They call it The Biggest Bank Robbery In History.

Friends, I don't see a way out of this.  I've been beating on this drum since I started here.  Do your best to prepare. 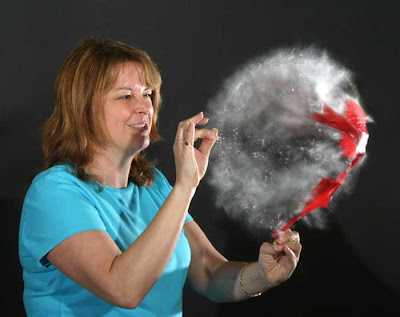 A balloon at the moment it pops (Ted Kinsman photo from here).
Posted by SiGraybeard at 9:43 PM