We could all do worse in life than to emulate Antonin Scalia.  In pretty much everything.

The witnesses saw Scalia at the Fairfax Rod and Gun Club, where he is a member, around noon on Wednesday of last week. He was with a woman who was noticeably diminutive in height, like Kagan, who stands at about five feet three inches. The witnesses, who got a very close look at the pair, say that the woman was the newest Supreme Court Justice. 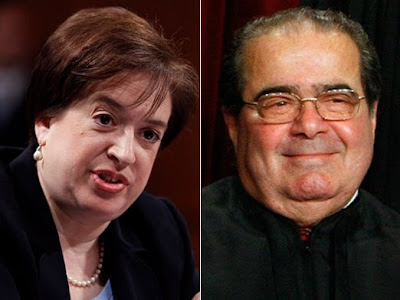 Justice Kagan has a reputation for being rather strongly anti-firearms and I just have to applaud - and thank - Justice Scalia for taking her to the range.  I guess it's a commonly held belief that many anti-firearms hoplophobes are just not familiar with guns or the gun culture; they go through life without meeting or talking to any real people.  How else could something like the "assault weapons" ban happen?  They have to be completely ignorant of the guns and even the principles involved.  Perhaps she'll come to realize that the people who endure the hassles to carry regularly are the safest people to be around.