Thankfully, It Wasn't That Bad

After a full day with no reappearance, it appears our war with the Security Tool was short-lived.  Mrs. Graybeard discovered you can kill the process while its starting by quickly applying a three-fingered salute as soon as XP showed her desktop, and getting task manager.

We had been using some of the geek-friendly web sites and found some places to look for trash - sure enough, we found some trash to delete.  The actual executable was called 23397.exe.  I'm pretty sure at every infection it gives itself a random number.  There was a .lnk file we deleted, too.  Then we ran  SuperAntiSpyware, which found four other files hidden in out of the way directories in the "%UserProfile%\Application Data" tree and "%UserProfile%\Start Menu\Programs\Security Tool.lnk".  Once that handful of files was deleted, it was fine and has been so since around 2200 last night. 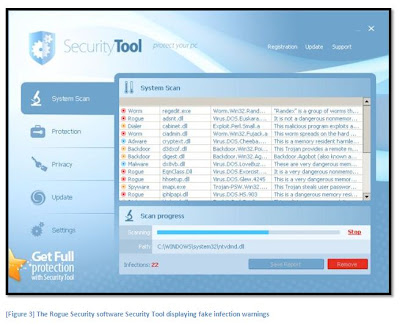 This is displayed with the "always on top" property.  It spoofs your desktop, and cripples programs.  If  you try to run a virus scan or update, it blocks the net access so that it only looks like it's working.
Posted by SiGraybeard at 9:12 PM