I've written here several times about the coming confiscation of our 401k plans (like here).  The effort appears to be ready to come to a vote in the lame duck session coming in a few weeks, after the elections.  Connie Hair at Human Events reports:


Democrats in the Senate on Thursday (edit to add 10/7/10) held a recess hearing covering a taxpayer bailout of union pensions and a plan to seize private 401(k) plans to more "fairly" distribute taxpayer-funded pensions to everyone.


In a nutshell, under the GRA system government would seize private 401(k) accounts, setting up an additional 5% mandatory payroll tax to dole out a "fair" pension to everyone using that confiscated money coupled with the mandated contributions.  This would, of course, be a sister government ponzi scheme working in tandem with Social Security, the primary purpose being to give big government politicians additional taxpayer funds to raid to pay for their out-of-control spending.

The politics of a lame duck session are strictly out of our control (as if they listen to us, anyway).  If your congress-critters have been voted out of office, they can do this as revenge on you, or out of loyalty to people who line their pockets, or out of fear of or loyalty to their party leaders, Harry Reid or Nancy Pelosi.  They might listen to protesters out in front of the capital, but I doubt it.

IMO, Civil War II started some time ago as 4th generation war.  It is largely cold and aimed at winning hearts and minds.  Is this theft going turn it into an open, "shooting war"?  I'm not sure I can envision a better way to do that, if that's the administration's goal. 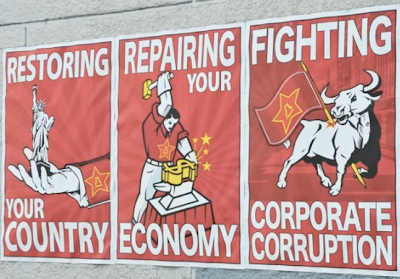 Posters from the 2010 remake of Red Dawn (unofficial site, but the best I can find).  Instead of the Russkies,  this time it's the Chincoms.  Pretty amazing that they may well be preempted by the real deal.
Posted by SiGraybeard at 11:23 AM