Did You Know That YOU'RE The Problem With the Economy?

As I use up my last couple of days of vacation, I've been sleeping-in to really, really late hours - like 8 or even (blush) 8:30 in the morning.  So today, while stumbling around and making my first cup of coffee, I turned on Fox News almost at the end of the Fox and Friends show (8:45?) to find Geraldine Ferraro saying the problem with the economy is that the common people aren't spending.  You ingrates are making His Worthiness, Obama, look bad.  The Beneficent Government has done so much for you, but it's all you (mild tone of revulsion) people who are messing up the economy.

When Steve Doocy, one of the hosts, said people are afraid; they're insecure about the future, about taxes going up, Ms. Ferraro said (as best as I can recall), "I've heard Obama say at least a dozen times that he wants the tax cuts to stay for everyone except the top 2%.  You talk about fear, my 16 year old grandson came up to me and was worried about all this debt that he hears about.  I had to tell him, 'Now, dear, there's no problem.  What you have to worry about is the top earners not paying that 700 billion dollars they owe'."  At this point, my head exploded, and I've been Supergluing the pieces together ever since. 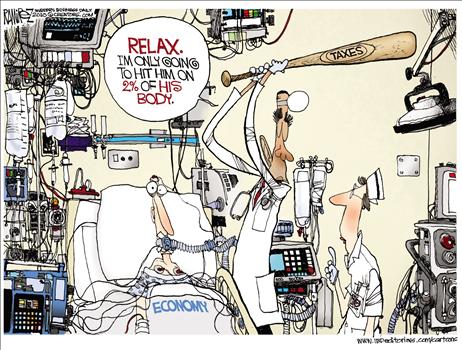 The first place to start with that pile of steaming crap is the whole idea that that tax money belongs to the government and not the people who earn it.  This is utter Marxism/Leninism, but a disgustingly common attitude.  The next thing to attack is that 700 billion dollar number.  That's imaginary - it's a projection based on econometric models of how much the economy will grow in the next 10 years.  Accurate?  Go back and find the models from 1998 and see if they predicted a global economic collapse in 2008.  If you don't mind, I'm not going to wait.  Besides, I did a whole posting on this pretty recently.  It's the Spending, Stupid.   Maybe you get their projected tax increase for the first year, 30 billion, which pays for their deficit for a couple of days.  As Margaret Thatcher so brilliantly said, "They [socialists] always run out of other people's money.".

In a problem as big as our economic mess, there's always lots of blame to go around.  Certain bankers should be tried in court.  Barney Frank and Chris Dodd should be tried.  The heads of Fannie Mae and Freddie Mac, going back to around 1998, should be tried.  But the central problem is that Keynesian economics is failing, and the whole world is finding out the hard way that paper currency eventually returns to being worth what it's raw materials (paper and ink) are worth.  Even worse, digital currency returns to the value of a bit of memory storage.

Administrivia:  Thanks to the Gormogons, I've found a new blog worth checking out, Professor Mondo  I didn't think I'd have much in common with a "medievalist at a small college in a small college town", but he's good.  This article on the Sally Struther's Government is wicked smart, and also funny.

And thanks to Professor Mondo, I find "Six Meat Buffet", a blog in the style of IMAO or The People's Cube.

Many people refer to "web surfing", but surfing is too organized.  It's more like a ping pong ball in clothes dryer.
Posted by SiGraybeard at 9:32 PM