Question for You Psychology Experts Out There

So what happens when a malignant narcissist gets insulted? 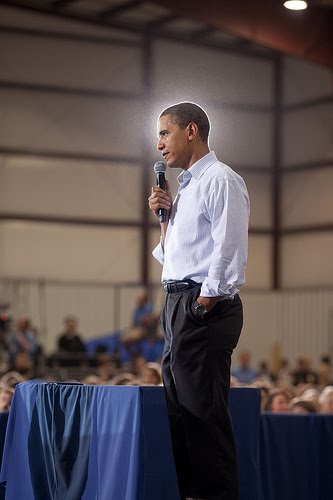 In the nearly two years since the election of Barack Hussein Obama, many commenters have remarked on his apparent narcissism and sociopathic tendencies (Charles Krauthammer was apparently the first).  With a sentence like that, it might be difficult for you to believe that I feel sorry for Mr. Obama - really.  He was left by his father at an early age, then abandoned by another father, and finally by his mother before being raised by his grandparents. Everyone knows that he was taken under the tutelage of Frank Marshall Davis, a communist.  His mother's and (genetic) father's ties to communism are trivial to document.  Everybody who cares to read about it knows these things.  Dinesh D'Souza's book "The Roots of Obama's Rage" seems to do an excellent job of deconstructing the psychological mess in the most powerful office in the world.

Abandoned by father, abandoned by mother, shuffled around like excess baggage, and some writers have commented that they think young Barry Sotero was sexually abused.  How can someone going through that not be screwed up?  I feel sorry for the guy, but we can't waste time with that.  Now his problems are our problems, and the way he reacts to the insult of his agenda  being repudiated by the American people will set the tone for the next two years.  Mr. Obama is still the president for the next two years, so get the idea out of your head that this election changes everything.  To quote Dinesh D'Souza,


We are today living out the script for America and the world that was dreamt up not by Obama but by Obama's father. How do I know this? Because Obama says so himself. Reflect for a moment on the title of his book: it's not Dreams of My Father but rather Dreams from My Father. In other words, Obama is not writing a book about his father's dreams; he is writing a book about the dreams that he got from his father. ( bold added )

Think about what this means. The most powerful country in the world is being governed according to the dreams of a Luo tribesman of the 1950s — a polygamist who abandoned his wives, drank himself into stupors, and bounced around on two iron legs (after his real legs had to be amputated because of a car crash caused by his drunk driving). This philandering, inebriated African socialist, who raged against the world for denying him the realization of his anti-colonial ambitions, is now setting the nation's agenda through the reincarnation of his dreams in his son. The son is the one who is making it happen, but the son is, as he candidly admits, only living out his father's dream. The invisible father provides the inspiration, and the son dutifully gets the job done. America today is being governed by a ghost.

How will he react?  Vanderleun says in this article:


Of all people Time’s Mark Halperin, tool and fool and formerly full-time Obama pegboy, writes, "The White House is in over its head, isolated, insular, arrogant and clueless about how to get along with or persuade members of Congress, the media, the business community or working-class voters." (note re: pegboy: I didn't even know they had a word for that!)

This man hates the culture that produced him and with reason. Far from reining him in, the coming destruction of the Democrats only frees him to get his hate on in a more direct and unrestrained manner.

With the likely numbers of positions in the house and senate that the Stupid party can claim back from the Evil party, the Stupids can still do nothing on their own.   If they succeeded in passing bills to repeal the health care bill or any of the other kilo-page bills, Obama would simply veto them.  With the intricate ecosystem of czars he has appointed, congress can be made completely irrelevant.  All government can be done by regulatory fiat.  That's the essence of what Cass Sunstein specializes in.

So what happens when a malignant narcissist gets insulted?   They become filled with rage at the people who don't idolize them; filled with malignant anger at anyone who does not appreciate how wonderful they are.

God help us all.  And God save the Republic.
Posted by SiGraybeard at 11:35 PM