Why I Am Afraid of EMP

I mentioned that if your antenna was narrowband, like so many are, or the radio was narrowband (which pretty much all are), it would likely be safe.  It also points out the big problem with an EMP.

The EMP electric field is broadband, so it will couple more power into electrically big structures.  The largest electrical structure on the planet is the power grid.  Somewhere near the grid in size is the phone system.  These are going to be damaged by an EMP, perhaps completely destroyed.  I know that the industry is aware of this, and some companies are actively working to prevent EMP or solar flare damage.  I don't know how widespread these things are, and the system is as weak as its weakest links. 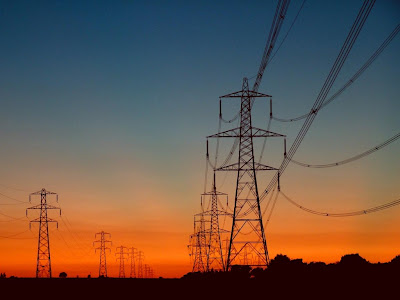 In both cases, the wires extend as solid connections over hundreds of miles.  The fields induced into these wires will be enormous, leading to power surges that will undoubtedly damage the equipment at the ends if it's not prepared for it.  In the case of phone systems, the switching centers at the ends of those long lines will be damaged.  In the case of power lines, some of the damage may be generation, but most of those systems are not at the ends of hundreds of miles of wire.  Power plants tend to be close to transformers that step up the power for distribution.  The transformers will bear the brunt of the damage and that's not very comforting. It's not like there's a ready supply of thousands of these very specialized transformers.

Don't think that your cellphone will get you through.  After it leaves that little radio in your hand, which won't be damaged, and gets to the first tower, it's all plain old wired telephone lines.   If the phone network goes down, our cellphones or smart phones do, too.  Amateur radio repeaters are likely to remain operating, and ham radio emergency communications is likely to come to the forefront of rescue efforts.

Power lines and phones are areas that most people who write about EMP will emphasize because it's a very serious problem.  It's highly uncomfortable and stressful to be without power for a couple of weeks (and not uncommon here in hurricane country); it's deadly to be without power for long periods, which is what will happen.  In colder climates, it's life threatening during the winter.  Northerners are forgiven for perhaps not thinking that it's just as life threatening in the south over the summer.  Remember a few years ago, when Europe had a hot spell over the summer and almost 15,000 people died in France, alone?

Damage to the power grid would lead to widespread problems.  Many companies (including the one I work for) and many people (especially here in hurricane country) have backup generators for those 2-4 week periods.  All of the local AM/FM/TV stations have backup generators.  What happens if that becomes months to years?  If we had reliable fuel supplies, we could live on the generators.  We would have more maintenance than is convenient, but could keep refrigeration going for food and purification for water.  I can't predict if fuel will be available.  Certainly the energy companies could use part of their energy to provide backup (for example, the natural gas company could use some of their LNG product to run generators to keep their systems up and running).  The question is whether or not they do.


Our society is fed and clothed by a constant flow of trucks across the country, bringing goods from all over the world to local stores.  The trucks will undoubtedly keep running - if they can get diesel fuel.  Truck routing may suffer and inefficiencies add to cost, but that's not very important compared to the fuel.

Likewise, trains bring the larger cargoes around the country, between trucking distribution centers.  Will trains run?   I'm not so sure.  The trains' locomotives probably won't be affected, but the tracks are hundreds of miles of metal; big antennas to collect the EMP energy.  I don't know enough about train switching systems to know if they'd survive the EMP.


The loss of the grid would be catastrophic to western civilization. As a result of the availability of energy, people who would have died a hundred years ago are living independently at home today; people who use oxygen at home, people on a variety of medications or medical devices (pacemakers, insulin pumps...) and others.  Sadly, many of those people will die.

Where does this leave us?  In a weird place.  Our computers may work, but the power to run them or the internet routers might be missing.  Even if available (the Internet was designed to work around nuclear catastrophe), many of the things we use it for might not be available. Our radios and TVs will probably work, but the stations to inform us may only last a few weeks - to report on the beginnings of social chaos.  Our cars would continue to get us to work, but the companies may not be capable of staying open and in business.  We could drive to get out of town, but gas stations might not be able to run the pumps to keep us moving.    So it all comes down to the power grid.  How well it handles the problems and how robust it is to multiple failures.  "Smart Grid" won't do anything for you; all it can do is force rationing onto you.  It would probably increase the susceptibility of the grid to EMP.
Posted by SiGraybeard at 9:10 PM