An Update to Previous Predictions

A while back, August 25th, I posted this plot.  Emphasis on the right end of the top graph.
, 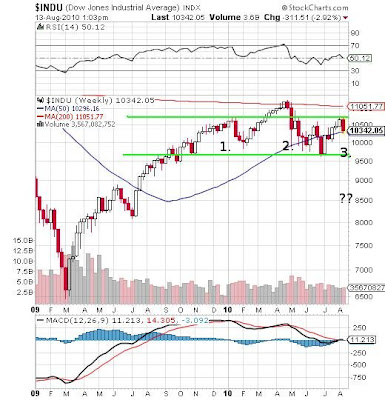 
That pattern forming on the right is a "head and shoulders" pattern, and we are just now going over the peak of the right shoulder.  That means a fall to the downside typically equal to the difference between the top of the head at 11051 and the lows shown by the bottom green line.  This predicts that the DJIA will drop to 8000 or 8200, probably (this is the guess-y part) in 2-3 months.

Now that another month has passed, and the DJIA is around the same range as it was a month ago, it's instructive to look at what has been going on.  This plot will be a different plot, the S&P500 instead of the DJIA, but if we're looking at the overall market, the same overall shape should appear in both places.

What this is showing is that the expected fall on the right hasn't happened yet.  The S&P has been in a trading range and actually testing its resistance line (the level it hasn't gone above since April).  There is some talk among bulls that what we're seeing is an inverse head and shoulders pattern developing (conveniently labeled in this plot).  That would imply the market is going to go up, probably to the peak values seen in this range, and possibly higher.

So which is it?  Up or down?  If you're trading your own, real money, this is almost "life or death" serious.

It's really important to see what's really there and not your biases.  The only way for an individual to make money in the market is go against the herd and be a little contrarian.  You may have seen my book, "How I Turned a Million Dollars into 25 Cents in the Stock Market"*, so maybe you shouldn't listen to me.

For the record, I am sticking by my prediction of DOW 8000 by around Thanksgiving.  My take is that if you've been waiting for a good time to get out of equities and into money markets or cash, this is better than a few weeks ago when that pattern said "head".

*Note: there is no such book.  At least not that I've written.
Posted by SiGraybeard at 9:54 PM