That Slippery Slope Keeps On Tilting

Ambrose Evans Pritchard at the Telegraph (UK) had an article over the weekend that is unique in its honesty.  It's titled "The Eurozone is in Bad Need of an Undertaker" and lays out the brutal truth that the Euro is in dire trouble.  Simply put:


"The EU’s Franco-German "Directoire" and the European Central Bank have between them ruled out all plausible solutions to the eurozone’s debt crisis", explains the article heading.  (emphasis added - GB)

Farther down it contains this gem:


“If the Eurozone follows this path, either all of the sovereign debts become German public debt, or the Euro will collapse,” ... says " Stefano Micossi from the College of Europe, the sanctum sanctorum of the European Project".

As Angela Merkel herself has said, if the Euro collapses, the European Union collapses.  When you remember the Fed "loaned" trillions to EU banks, do you think the dollar survives?

The problem, quite simply, is that there is not enough money in the EU for all of the debt that has been accrued.  The Euro is essentially funded by Germany first, then France and the UK.  In essence, to bail out the countries in trouble, if it's even possible, the upper income taxpayers in those three countries must have their lives confiscated.  It's punishing good taxpayers in some nations for problems other nations have created.  How long can that go on?

In London they're doing this over having to pay college tuition.  What happens when you ask them to pay someone else's tuition?  Someone in a different country? 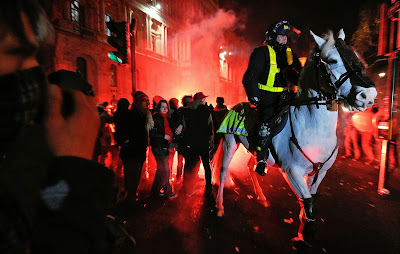