Entering the Sea of Doom

I hope you all had a wonderful Christmas, assuming you observe it, and a wonderful day no matter what you observe.  I purposely avoided news yesterday, just to have at least one day of without the nonstop bad news we are barraged with.  As the joke goes, "Break is over.  Back on your heads".

Frequent visitor and fellow electrical engineer-geek, LeverAction, posts on something I saw the other day that made shivers run down my spine.  In "Just How Bad Is It?" he points out:

The last figures I have for US GDP are from 2009, $14.1 Trillion.  I don't know what this year's figures are, but using the 2009 GDP (which will be close) and 2010 debt, that's a debt ratio of 95.5% of GDP.  It probably goes without saying that I'm skeptical of government numbers for growth in the economy and most generally reported statistics.  There's ample evidence that the Fed.gov leviathan changes the way they report such things all the time, in whatever way makes those in power look good.  John Williams at Shadowstats has made a nice little career of keeping track of these lies changes so that businesses and others can keep track of the stats they need without having to constantly fight them.

How bad is 95.5% of GDP?  It makes us one of the worst in the world.  It's difficult for me to tell you exactly where we rank compared to other nations because the latest statistics I can find seem to be from various different years.  This graph (from here) is closest, and it's from 2009. 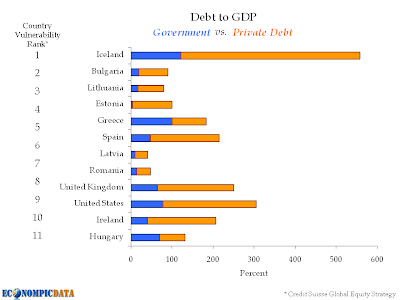 The source here is ranking the countries by both the government and private debt as percent of GDP.  If you ignore the private debt side, you see that we're around third worst in the world.  I'm not sure why Japan isn't in this chart; it's possible the bank (Credit Suisse) that generated this didn't consider Japan. I think no matter who you count we're in the five worst government debt to GDP ratios.

Conclusion?  The US is in really bad shape.  No surprise.  What really concerns me is that I'm not familiar with any country with debt to GDP ratios like ours ever becoming prosperous again.  They all fade to gray.  Or worse.  Or even worse.  What do you think?
Posted by SiGraybeard at 8:35 PM