What Would You Do If You Had A Year Left? Two Years?

Because you do.  This post is almost a year old and most of it is happening already, to some degree:


Celente says that by 2012 America will become an undeveloped nation, that there will be a revolution marked by food riots, squatter rebellions, tax revolts and job marches, and that holidays will be more about obtaining food, not gifts.

Sometime in the next two years, it's almost certain that the final collapse of the western economies will happen. At that point, it's hard to know what will be left of society and what we will turn into.  One thing I'm sure of is that it won't be the end of the world, just the end of the world as we know it.

A couple of years ago, Tim McGraw had a monster hit song in the Country music world, "Live Like You Were Dying".  The basic story is conversation with a guy who in his early 40s discovers he has a terrible disease.  His answer is:

This all sounds terribly self-centered, although maybe some would say self-actualizing.  It's the kind of thing you do if you have problems, but your children and family will just have to muddle on without you.  What we're looking at is a situation where everyone in the family, the extended family - your tribe - has problems.  Will you be a leader?  Will you be protector?  A guardian?  Will you be useful when there are problems?

Useful is the best thing you can be.  School started a while back, and while we don't know the exact date for the final exam, we know there will be one.  Doing any training?  Are you putting a few cans aside? 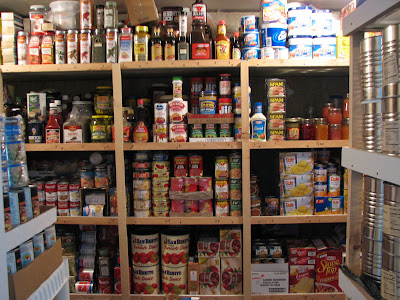 (image from Kellene at PreparednessPro)
Posted by SiGraybeard at 8:05 PM