News From The Southern Front

This may not have made news where you live, but I notice that Hugo Chavez has made a deal with Iran's AhmInAJihad to place Iranian Intermediate Range Ballistic Missiles in Venezuela.  Missiles with this sort of range could hit much of South America and the Caribbean, and even reach the southern US.  More details at Babalu and Fausta.  Caroline Glick's column (first link) has great coverage of more of the nuances of why this is going on.

Just about a half century ago, 1962, the Russians did the same thing in Cuba, and the Cuban Missile Crisis ensued.  President Jack Kennedy, for perhaps the only time, showed he had some balls and stood up to Khrushchev, enforcing a naval blockade of the island.  The period is remembered by locals who lived through it here on the Space Coast; there are stories of highway A1A being closed by military transports, and massive movements of troops.  Me?  I was a snot-nosed grade school kid in Miami.  I knew something important was going on, but didn't grasp the "adult situation".

Do we expect Obama to live up to this example?  Not hardly.  Not with the Boy King.  As James Carville recently said, “If Hillary gave him one of her balls, they'd both have two”. 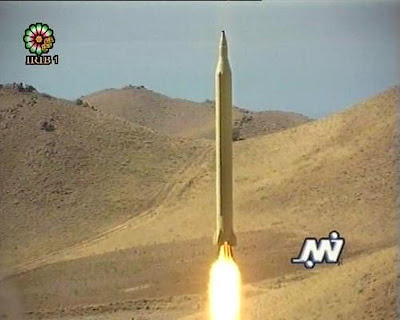 Iran's Shahab 3, said to be one of the missiles in deployment in Venezuela.
Posted by SiGraybeard at 7:59 PM