It Was a Weird Week

"She's the kind of a girl,
who makes the News of the World
yes, you could say she was attractively built"
- Polythene Pam, Lennon and McCartney, 1969, Abbey Road B Side

The guy progressives think is evil incarnate because his media empire includes Fox News, Rupert Murdoch, killed the British tabloid News of the World this week, over a "scandal" involving hacking the phones of a dead schoolgirl, some victims of the 7/7 Tube bombings and some British servicemen who died in Afghanistan.  Classless? No doubt.  Rude?  You betcha.  But that's what tabloids do. The News of the World was a 168 year old newspaper and still wildly popular - can the NY Times say as much?  As the inimitable one, Mark Steyn, said over at National Review,


"Nobody much cares if the Aussie supermodel Elle Macpherson and other denizens of the demimonde get their voicemails intercepted, but dead schoolgirls and soldiers changed the nature of the story, and events moved swiftly. On Thursday, Rupert Murdoch’s son and heir announced the entire newspaper would be closed down. The whole thing. Gone."


"Last Sunday, it was the biggest-selling newspaper in the United Kingdom and Europe. This Sunday, it’s history. To put it in American terms, consider those George Soros–funded websites claiming they pressured Fox into “firing” Glenn Beck. This is the equivalent of pressuring Mr. Murdoch into closing down the entire Fox News network."

Now the left knows exactly what it has to do to get Murdoch to flinch.  Just bait someone in the hated news service du jour, and keep baiting until they do something that gets a reaction.  Expect this to step up.

The White House is starting to believe they don't need congressional approval to raise the debt ceiling.  Such sterling legal scholars as Chuckie Schumer and even the occasionally-sane Chuck Grassley are starting to say such things.  Schumer, of course, has taken life on as the politically correct replacement for the phrase, "when the Schumer hits the fan" or "Schumer flows downhill", so he's already a laughing stock.  Grassley is doing good work on Gunwalker/Fast and Furious, and does display occasional cogency.  On the other hand, Grassley is one of the guys who got corn ethanol subsidies passed.  He is from Iowa, after all, a corn-intensive state, and bringing home the bacon, um, bringing home the bread, or cornbread is what he thinks his job is.

Am I the only one who thinks this is a bad idea?  The debt ceiling has been a legal falsehood since 1917 - false in the sense that a ceiling has never, never, been held when congress wanted to spend more.  So now, when we finally might have the stupid party invertebrates in congress growing the most rudimentary spines and standing up against spending, the president is going to decide this?  Excuse me?

And, of course, not passing a debt ceiling doesn't mean default - I'm tired of hearing that.  It simply means we have to eek by on $200 billion per month tax income; a lot, but 2/3 of what they want to spend.

Casey Anthony,  Planned Parenthood's Mother of the Year, Not Guilty

I really shouldn't say much about this, because I did my best to avoid the story.  It was wall to wall on the local news when the poor little girl disappeared, and has been in the news ever since.  For a couple of years, I've been hitting the mute button when coverage came on TV.  As I said in the OJ case, you'd have to be a pretty bad writer to not be able to come up with some plausible scenarios where someone else did the murder.  I know because I'm a pretty bad writer, and I can come up with at least a few.

So not being contaminated by any, you know, actual facts, I can pontificate with the best of the media.  I think the jury simply concluded the state didn't prove the case beyond a reasonable doubt.  As others have said, our legal system is deliberately set up with the view "it's better to let 100 guilty men go free than to hang one innocent man".  I don't think we measure up to that, even on our best days, but it's a worthy goal.  We go so far as to allow juries to nullify laws they find immoral or "wrong" - even if the defendant is thought to have violated that law - by finding them not guilty.  Is young Miss Anthony a psychotic?  Sure looks like it to me.  But being psychotic and being a murderer are not identically equal.


"...although I will say that there is no truth to the rumor I’m starting that the National Organization for Women (NOW) will be honoring Casey as the “Woman of the Year” for pioneering abortion in the 11th trimester."

(source)
And if you're as old as I am, you'll remember a two season long satire show in the 1960s called "That Was The Week That Was". 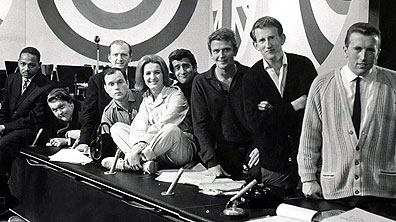 Posted by SiGraybeard at 6:38 PM