Did you see that His Incredible-ness, Al Gore, has decided that he needs to have an awareness telethon for Global Climate Change Whatever They Call It This Week?  Story here

So.. Al owns a TV network that belches this nonsense 24/7/365; GE/NBC/CNBC/PMSNBC/The Weather Channel runs green week on almost endless tape loop to advertise their products, the greenies own the press, the White House, and most of the Senate, so that we hear about being "green" and reducing our carbon use roughly every 10 femtoseconds of every freaking day... and he still can't compete with those "well-funded deniers"? Face it, Al, maybe you're just not a very effective communicator.

And maybe, Al, Americans are fairly sophisticated about snake oil salesmen and folks know when we're getting, well, a snow job? 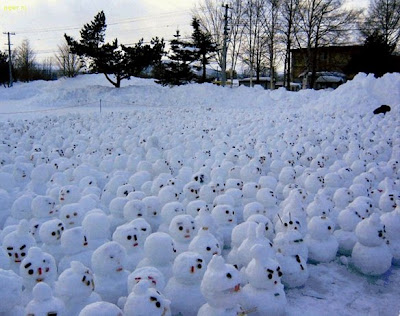 About 14 months ago I wrote a post called "Imagine There Is Man Made Global Warming"  It's a bit long to quote here, and the intervening year has changed some of the legal stuff, but let me excerpt a little here (edited):

Now, the economic/social havoc of those restrictions is unimaginably awful. No cars, extremely limited electrical power (if any), no ambulances, no police cruisers: a rural, agrarian lifestyle.  For no benefit; you are destroying the USA for no reason at all. If you choose to live that way, help yourself. Move out of the city, grow your own food, live on a farm.  Knock yourself out.

And that's their dirty, stupid little secret.  What if there really is man made global warming?  Use their numbers.  Calculate how much effect you would have on temperatures by virtually destroying everyone and everything you ever have known, and it has no effect at all.