We are taking away a choice that continues to let people waste their own money.

Stunning level of ignorance of the free market.  You see, you individual consumers are so bad at wasting money, you should let the Fed.gov have your money.  They waste money at a rate unlike any the world has ever seen. As Mark Steyn said,


Secretary Chu and his colleagues took a trillion dollars of “stimulus” and, for all the stimulating it did, might as well have given it in large bills to Charlie Sheen to snort coke off his hookers’ bellies with.

That way, at least something would have been stimulated.  The whole stimulus program reeked of being conceived by guys who slept through class.  The program is based on Economics for Dummies, not reality.  Besides, stimulus couldn't work in the 2008 situation, because the crash of '08 was due to too much leverage that had to unwind, not inadequate spending.  Wrong treatment.  You can't fix a broken leg by giving antibiotics.

Getting back to Dr. Chu, it's a symptom of the technocracy that they put people in charge with no experience at anything except for theoretical classwork, and those people don't have a clue when the world doesn't fit their neat little models. These guys have the lowest amount of real world experience in almost 100 years.  This chart is old, but still valid as far as I know. 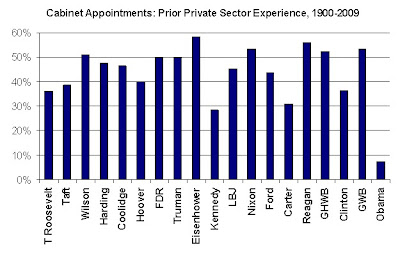 To let Steyn have the last word: