Why It Keeps Getting Worse

Today's events lead me to be even more sure than ever that economic collapse will not be prevented.  Worse, it appears that the entire world will be affected.  And it will happen because the "experts" can not see reality.

There's a saying everyone knows: "when you have a hammer, every problem looks like a nail".   The wisdom in here is deeper than first glance.  It speaks to not being able to get the right answer until you ask the right question.  It speaks to the confusion academics feel when the world doesn't fit into their neat little theoretical boxes.  It speaks to forcing the problem into your world view rather than seeing what's really there.  QE3 is coming, and as Kevin has said about other things, since the results don't match their model, the motto is "do it again, ONLY HARDER!".

This is the problem we face.  Our leaders have the wrong tools for the problems and are incapable of seeing what to do.  Items from today's news in various places:


Ron Paul today asked Bernanke whether or not he watches the price of gold and if he thinks gold is money. Although Bernanke admitted that he does watch the price of gold, Bernanke said that gold is not money, but it is only an asset. Bernanke explained that central banks only hold gold as a "tradition". (source)

Interesting how this man's education, and that group of academics who all think the same things, allows them to counter over 5000 years of human history.  Gold has always been money - where it existed.  Where it didn't exist something else that was valued and not available in unlimited quantity took its place.  Isn't it interesting that they think their education is going to change human nature?   Wanna bet?  They apparently do.

"Pimco's Bill Gross made the News headlines today, when he said that: "The Federal Reserve is unlikely to change monetary policy for years as the economy remains mired in an extended period of slow growth".   "But it's not an endorsement of Treasurys. For months now they have been more of an insurance policy than an investment."

What is Gross suggesting?

He is suggesting that the economy isn't going to recover anytime soon ... possibly years.  He's not he only one to think we are going to see a really tough economy for a some time.  There are some strong vocal opinions that think the economy won't even hit bottom until 2013 to 2015.   If this turns out to be true, then Bill Gross will be correct ... even though it means Americans will have to go through more pain."

Bond rates are going to rise.  They must.  Not enough buyers want them at the current yield.  The interest rate is being held artificially low by the Fed buying our own bonds.  In the long term, that destroys the dollar.  When the rates go up, the interest on the federal debt goes up in the budget and that makes the debt problem worse.
......
So now, look at the circled area on the chart below.  That is where the interest rate fight is going on now.   If the TYX rises above 45.9, there would be a real serious threat to the current 15 year down trend.   Bernanke, home owners, and the economy all need Bill Gross to be right ... even then, it will be a hard road ahead until enough debt de-leveraging has been accomplished. 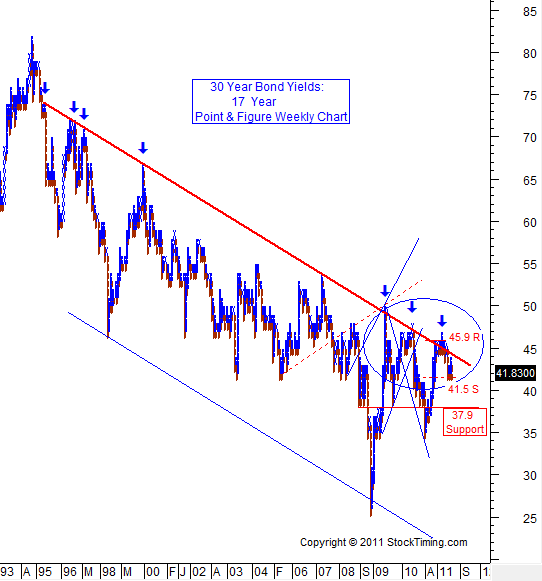 Speaking of politics, I found this Dr. Fun cartoon of Mitch McConnell and John Boehner. 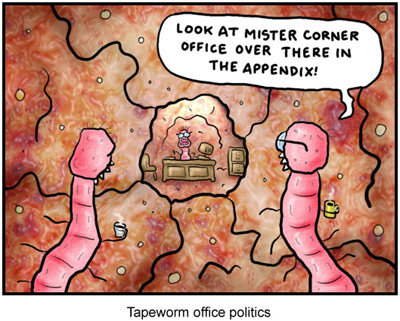 Just when I thought that maybe those two invertebrates had started to develop  spines, I heard of McConnell's proposal to give Obama and the Democrats the ability to decide for themselves how to handle the debt ceiling.  Oh, yeah.  What could possibly go wrong?  Let's give them the credit card and tell them to just decide for themselves how they want to spend it - what cuts they want to make at some nebulous future date.  That's all they've proposed anyway - cuts at some future date.  Be very wary when you hear things like "(X) proposed a 4 trillion dollar spending cut" - that usually means four dollars a year for a trillion years


Earlier, I posed the question, do you want to bet you can change human nature, and my belief that the heads of the Fed, the ECB and the others think they can.  If history is any guide, they will learn that they can't change human nature when they're on the lamppost.
Posted by SiGraybeard at 8:42 PM