Kevin at The Smallest Minority links to the latest Bill Whittle Afterburner video, "A Great Future Behind Us".  It's Bill's almost tearful goodbye to shuttle Endeavour.  Go watch the video at Kevin's or on Bill's YouTube channel.  It's a lead-in to this rambling.

I've also written about my sadness at seeing the US lose manned access to space.  The country that put men on the moon has to buy access from the Russians, flying a ship first designed at the dawn of the space age.  Whittle points out the frightening fact that no one born after 1935 has ever walked on the moon.  Not before 1935, after.  They are all old men, and are leaving us.  In a few years, I expect dear granddaughter to say something like, "Grandpa, is it true men walked on the moon when you were a boy?"  And that will break my heart.

But it's not all grim.  There are private companies doing what they do best - innovating and going after that monopoly that the Russians have.  Elon Musk's company SpaceX has sent their unmanned Dragon capsule to the Space Station, atop their Falcon launch vehicle, and recovered it after return, making them the first private company to do all of it.  They have announced a design path to man-rate the Dragon capsule and a path to upgrade the Falcon to a heavy launch vehicle: in fact, it will be the most powerful launch vehicle in the known booster fleets of the world: 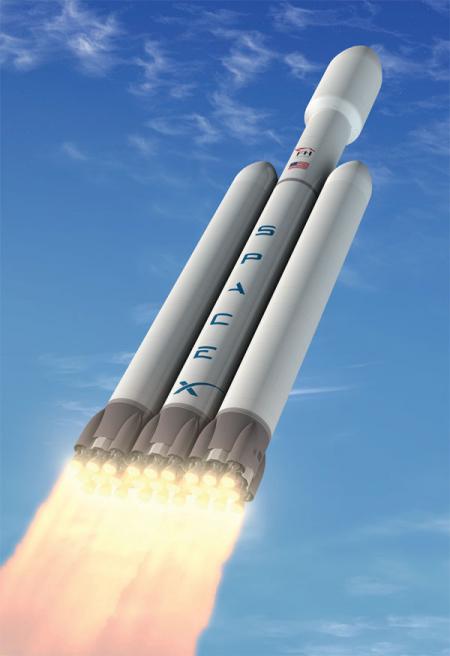 The Falcon Heavy will use the principle of running flight-proven engines running as a cluster of 27.  This has the advantages of keeping the hardware the same as what they've developed, and allowing graceful failure, should one engine shut down.  Since this will be liquid fueled and not a solid booster, like the space shuttle system used, it has some safety characteristics that the STS didn't.  Plus, it will connect all three vehicles' fuel and oxidizer tanks "in parallel" so that they all draw off the same tanks; this means that the central core will still have most of its fuel when the boosters drop away.  Concept video here.  More details on the SpaceX fleet and engineering here.

SpaceX is a startup company, and I'm amazed at how successful they have been.  It's a truism in the space launch business that as older guys who "just knew how to do stuff" retired, older problems started popping up again.  It's not uncommon for such errors to cause the loss of the vehicle.  An industry giant, like Boeing, who has been in the launch business as long as it has existed is interested in this market, too.   Boeing essentially has the designs for launch vehicles in its possession, since it has been the contractor making so many of the unmanned vehicles.  There are others in pursuit of the launch business.

Perhaps it's time to get the Fed.gov out of the space business.  Yes, they have opened the way into space, but they have left us with access only a major world government can afford.  No, I don't know of any new developments that these companies are working on, but perhaps it's time to turn the keys to the door to space over to entrepeneurs who keenly want to do more with less.