Hackers identifying with Hamas have sent threatening text messages to Israeli mobile phone numbers, via Twitter and on Facebook feeds.

The problem: The Hebrew grammar and spelling are riddled with errors.

Instead of causing fear – as intended – Israelis have reposted the messages with corrections and tips on how to better construct a threatening message.


Earlier this week, Hamas hackers overtook the Domino’s Pizza Israel Facebook page, posting threatening messages against Israelis. They didn’t know Israelis have been punching out jokes at a quick pace. Hamas hackers wrote: “Today will strike deep in Israel, Tel Aviv, Haifa, Jerusalem, Ashkelon, Ashdod more than 2000 rockets. We’ll start at 7. Counting back towards the end of Israel … Be warned!”

An Israeli response read: “Hey, please reserve a missile for me with jalapenos, green olives, extra cheese, and mushrooms. You have my address. Tell the delivery boy to activate the alarm when it is arriving, so I know to put my pants on.”

For their part, Hamas appears to be a bit demoralized.  From an Israeli soldier and reported in  the Jerusalem Post, and posted by The Right Curmudgeon (H/T, Joe the Plumber):

... a recognizable wave of demoralization has washed over Hamas’s combat battalions. “They simply escape, leaving behind weapons and suicide bomb vests that were laid out for battle. This morning we stormed a position, and they just weren’t there. I don’t see a determined enemy. We have encountered stronger pockets of fighting in the past. But now, I would not give them a high grade for fighting spirit.”

In the age of social media, it's inevitable that the conflict should spread to Facebook.  It seems, though, that faces aren't the only images that Israelis are posting there as encouragement to the IDF. 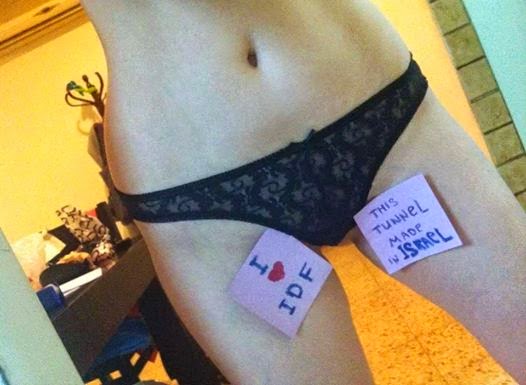