Anyone who has honestly evaluated the current generation of wind turbines has to say they have so many problems that they're just not ready for prime time.  Whether it's drawing excessive energy from the grid to operate, which results in them sometimes operating as an energy drain rather than producer, killing eagles along with other raptors and even bats, the green energy subsidies that hurt the local or national governments, causing illness or injury in nearby people, or simply being available only at the capricious whim of the wind, wind power simply hasn't lived up the hype.  Wind farms even interfere with NOAA weather radar!  It's a disappointment to everyone except the large crony capitalist companies that latched onto the free government money and put the turbines up.

Could this be about to change?

German physicist Albert Betz long ago (1909) calculated the maximum efficiency that a wind turbine could achieve, today called the Betz limit.  According to Betz's law, no turbine can capture more than 16/27 (59.3%) of the kinetic energy in wind.  Those monstrous infrastructure-sized turbines that we've all seen achieve about 80% of the Betz limit, or about 47% of the energy in the wind.  But what about other shapes?  The Dutch firm Archimedes tried the shape they named themselves after, the expanding spiral Archimedes' screw that has been used for pumping water since Archimedes' time.  They claim an efficiency of 80% - not 80% of 59% - a true 80% of the energy in the wind.  But it's better than even that:


Marinus Mieremet, cofounder of Archimedes, puts it this way: "Generally speaking, there is a difference in pressure in front and behind of the rotor blades of a windmill. However, this is not the case with the Liam F1. The difference in pressure is created by the spatial figure in the spiral blade. This results in a much better performance. Even when the wind is blowing at an angle of 60 degrees into the rotor, it will start to spin. We do not require expensive software: Because of its conical shape, the wind turbine yaws itself automatically into the optimal wind direction. Just like a wind vane. And because the wind turbine encounters minimal resistance, it is virtually silent.

Part of the energy consumption of conventionally bladed turbines is that they need motors to point them into the wind.  Their Liam F1 turbine self-yaws into the wind saving that energy.  Another energy waste for conventional turbines is they need motors to start their blades when the wind is below about 15 mph; the Laim F1 turbine cuts in at about 4 1/2 mph. Its maximum output is 1.5 kW which it reaches when winds hit a little over 11 mph.  Instead of huge infrastructure windfarms like GE makes, these are intended for individual homes (while1.5 kW still strikes me as terribly small, I'd sure like to have it in the blackouts after a hurricane). 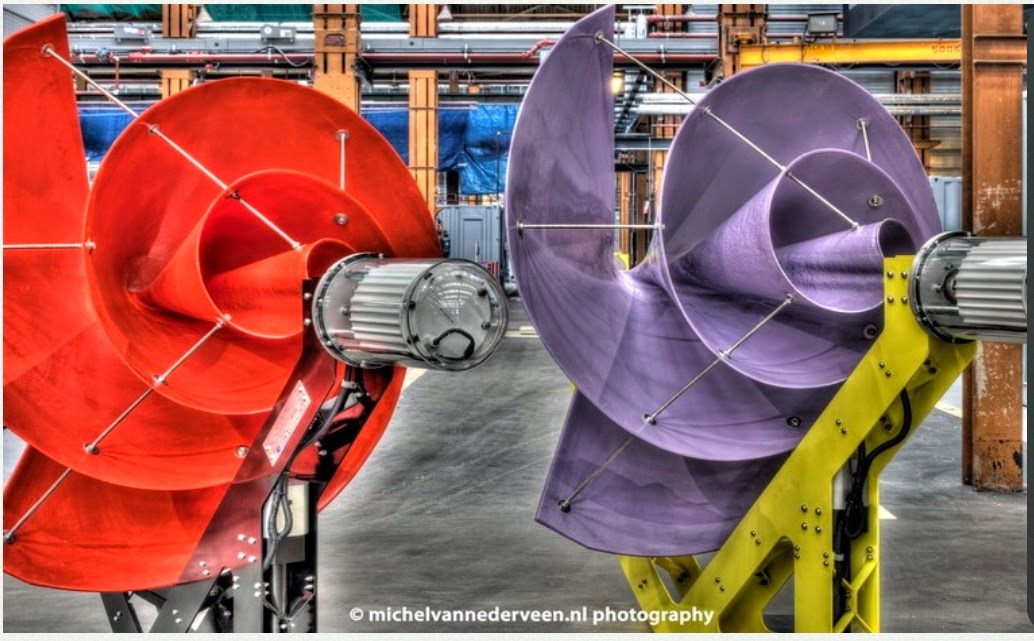 While 4.5 mph is good number, what about less breeze than that?  Nevada-based Wind Sail Receptor, Inc., (WSRI) is well into prototyping of a design that produces power with 3 mph winds.  Their design looks like the plastic pinwheels you get at carnivals.  The blades are of a special polyurethane material developed by inventor and WSRI chairman Richard Steinke. "An AK-47 round won't go through the blade. That's important in developing countries where we see a big market for small turbines."


The shape of the blades is such that the turbines can capture more of the wind than traditional designs and, thus, can do useful work at much lower wind speeds. "I did 52 different iterations of blade shapes to optimize the rpm to the torque generated," says Steinke. "Existing wind turbines have a lot of inertia so they generally need a starter motor to get them going in low winds. Once the wind hits about 15 mph, they can run with winds as low as perhaps 7 or 8 mph. But our blade design lets us start generating power at 3 mph and we don't use a starting motor. We are fine tuning our generator and changing the bearing system and believe will be able to start generating electricity at 1.5 to 2 mph."

Another benefit of the blade shape: essentially no noise. "Noise has been a real environmental issue in many locations with the traditional wind turbines operating in the 50 to 125 dB range. Our wind turbines run at a sound level below 10 dB, about the sound level of normal breathing," says Steinke.

The noise, or perhaps the infrasonic pounding of the giant turbine blades now in use, appears to be is the cause of Wind Turbine Syndrome linked to above. 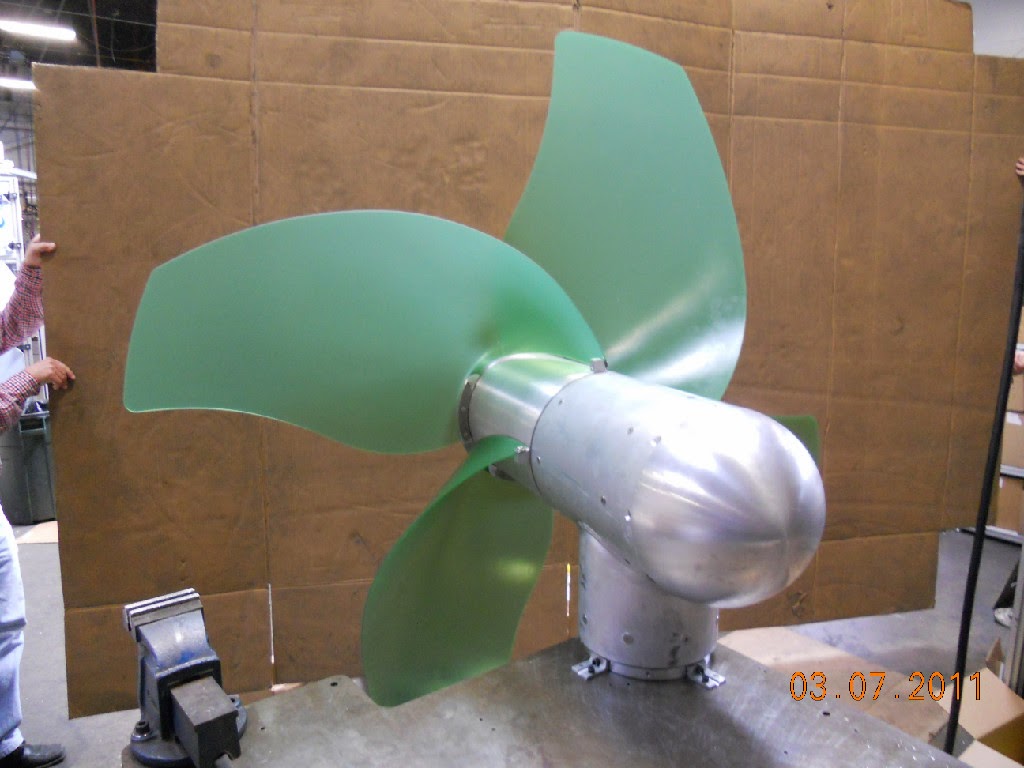 A pinwheel prototype being prepared for testing at Wind Sail Receptor.

WSRI is going for larger systems than Archimedes; more like infrastructure systems but still not as large as the GE/Siemens types.


WSRI is now producing 6-ft diameter turbines and expects to begin making 12-ft. units shortly. It has set up prototypes in Boulder City, Nev. and in Belgium. A 30-ft diameter model is awaiting completion of a custom-designed generator from GinLong. The turbines initially will be designed to work with 40 mph maximum winds until the generators get optimized for the wind loads, at which time Steinke expects to produce models able to operate at 50 mph wind speeds.

This strikes me as both cool innovations and interesting.  A story that plays out in industry all the time is that the first approaches to a task get an industry going, but then revolutions come from smaller shops.  Bright individual inventors who see a better way to accomplish things; sometimes they go after a niche market the big guys don't want to be bothered with, and sometimes David knocks off Goliath.  This is really the best information on wind power that I've come across.