The Law of Unintended Consequences And Suicidal Pilots

The Law has been on vivid display with the suicide plunge of the Germanwings A320 into a French mountainside.  It has been possible to see the heads of some of media types bulging under the pressure of trying to understand that there are no perfect decisions; that every decision involves compromise and needs to be based on trying to optimize conflicting outcomes.  "We reinforced cockpit doors and now we can't break them down when we need to!!"  "Someone has to DO something!!"  As always, when you the hear that, at a minimum put your hand on your wallet.  At worst, prepare to be railroaded "for safety".

I don't know that it has reached its peak, but the insanity certainly cranked up to 11 today on Fox News' "Bulls and Bears" business program with the first segment debating whether or not every cockpit in every plane, should live stream video of what's going on in the cockpit to the ground.  The common argument was "it's cheap".

No. It's. Not.  A single webcam is cheap.  The infrastructure they're suggesting to minimize the occurrence of an incredibly rare act is absolutely not. 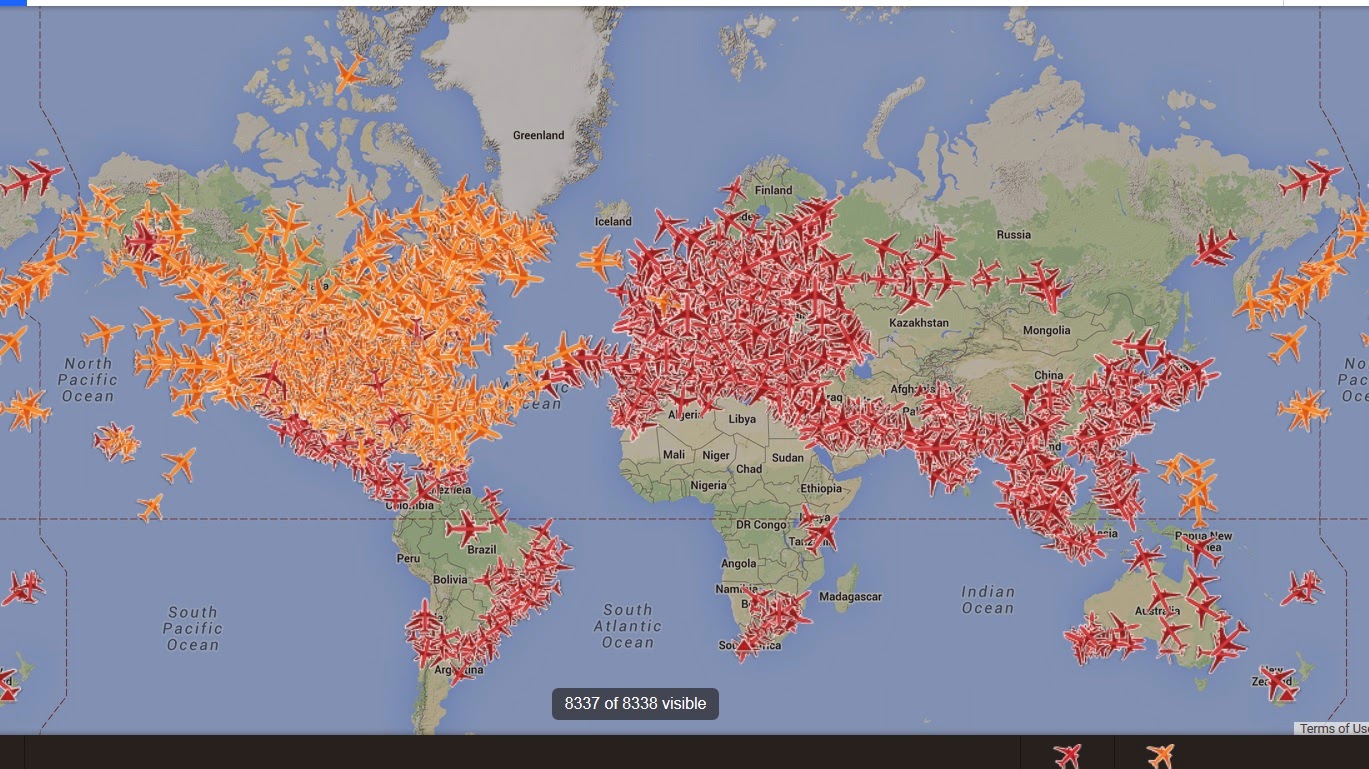 Actually, more than that; these are just flight positions reported by FAA, ground radars, which rely on aircraft transponder systems, and reports by ADS-B (Automatic Dependent Surveillance - Broadcast) systems on planes (shown in red).   Not every aircraft carries these systems, although all commercial Air Transport aircraft carry them.  The amount of video bandwidth required depends on the resolution and frame rate, but full motion low definition video (such as the old broadcast NTSC video) requires just over 4 MHz bandwidth.  There are no systems currently on an aircraft with this bandwidth freely available so that "all you gotta do" is add a webcam.  It would require new electronics installed on tens of thousands of aircraft.  Let's be generous and say for an Air Transport class avionics package, we can get new frequencies allocated, add an antenna and transceiver for $10,000 per plane onto 50,000 existing airplanes.  There's roughly $50 billion dollars in electronics to be made and installed (and I think I'm low-balling that); I'm sure my employer would love to take in a nice $50B, or some portion thereof.

If there are 8300 aircraft in the airspace now, let's assume 10,000 during peak travel times - probably weekdays for business travel - sending video down, how many people need to be watching that video to see if something bad is happening?  10,000?  How much do you pay them?  It will be an exceptionally boring job, watching people who are typically just sitting and doing nothing actively for hours on end, so what kind of people will you get to work there?  How do you hire them? Where do they work?   Just for fun, let's figure in the course of a day you'll have 25,000 people working 24 hours.  At $15/hr, that's just over $13 Billion in pay.  How many more billions for the infrastructure?

Even all of these questions are just the start.  Air Transport flights have what's called a Minimum Equipment List or MEL that details what equipment must be operating before it's allowed to take off.  Does the pilot monitor video cam need to be on the MEL?  Does the aircraft need redundant systems? If so double that $50B.  Systems don't just get put on airplanes; there are industry standardization forums that are created, and specifications agreed on by the airlines, the aircraft manufacturers and the electronics manufacturers.

For perspective, FlightAware (another service that provides real time flight information) links to the Aviation Safety Network list of the total number of incidents tracked to "whack job" pilots.  There have been 12.  Most of them did not involve planes full of passengers; three incidents involved more than 100 casualties since 1976.

And yet all of this begs the question, "so what?"  So what if we spend this few hundred billion dollars worldwide and put monitors in every cockpit?  What do we do with the information?  The video shows a fight in the cockpit, or just the copilot, so do we shoot the plane down?  Could we even reach the plane to shoot it down if we knew we had to?  We don't know the plane is a problem for itself or anyone on the ground, but let's kill everyone on board with an Air to Air Missile.  Or is it for postmortem; to try and figure out what happened when the plane went down?

Posted by SiGraybeard at 1:54 PM