As We Enter "The Holiday Season" 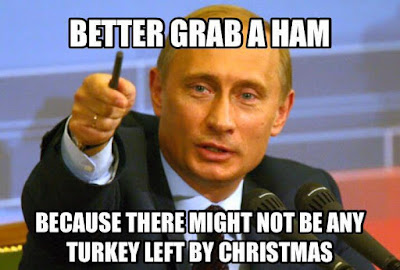 The words to listen to in the political gobbledygook going by are "Article 5" especially if those words are accompanied by the word NATO.   Article 5 of the NATO treaty is the "collective defense" article; the one that says an attack on any NATO member is viewed as an attack on them all.  You can be sure that Putin is aware of that and it's being figured into his gaming.  If there were any Warsaw pact left to counter it, they might well have thought the same of Turkey's action.  To quote from Tam:


To the suggestion that Russia would just continue to punk NATO with no response:


There are a lot of people saying we're in the early days of WWIII, we just don't know it.  I think we'll be finding out.  I don't think that Russia has the military strength to go down the road of pushing NATO.  Strategy Page noted this weakness in numbers the other day (H/T to BRM)


The Russian intervention in Syria involves some 4,000 troops and about fifty warplanes and helicopters. The small size of this force exposes a sad fact of post-Cold War Russia; the military no longer has much in the way of combat capability and few post-Cold War weapons. Thus Russia has few smart bombs and is mostly relying on unguided bombs built in the 1980s,  ...  The Russian air force and navy are now less than ten percent of their Cold War strength and the army has fewer combat brigades than it did armies during the Cold War.

So they'll likely do something more subtle to hit Turkey, perhaps something like Col. Ralph Peters suggests in this video.

May you live in interesting times, indeed.