I've got to admit to being a bit conflicted about the insanity going on across various college campae across the country.  Things like the racially motivated protests at  Mizzou, Yale, and even tiny Claremont McKenna College.

My first reaction is just the outright schadenfreude of watching "what goes around comes around" with the way young students are being brought up.  The protests at Yale started out being centered around an email about what costumes to wear for Halloween:


Erika Christakis reflected on the frustrations of the students, drew on her scholarship and career experience, and composed an email inviting the community to think about the controversy through an intellectual lens that few if any had considered. Her message was a model of relevant, thoughtful, civil engagement.

For her trouble, a faction of students are now trying to get the couple removed from their residential positions, which is to say, censured and ousted from their home on campus. Hundreds of Yale students are attacking them, some with hateful insults, shouted epithets, and a campaign of public shaming. In doing so, they have shown an illiberal streak that flows from flaws in their well-intentioned ideology.

It's fun watching the academic twits being out-idioted by the idiots they've been training to do exactly what they're doing.  It's heartening to see journalism professor Melissa Click forced to resign for trying to run an independent journalist off campus - if anyone on campus should know the jobs of the student journalists and their first amendment rights to cover a story, it's the j-school professor! 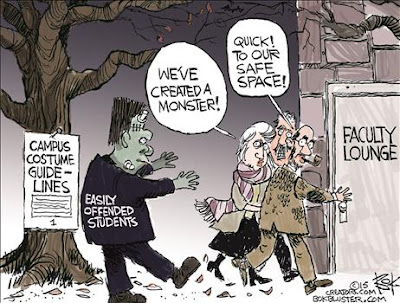 On the other hand there's potential for real trouble here.  I mean, do these last few years remind you of the late 1960s or what?  Considering that many of these protests are left against left, because the targets aren't far enough left, how far are we from a repeat of the Chicago Democratic Convention in 1968 next year at their convention?  It seems the last few years have duplicated all of the worst of the '60s, except for the assassinations.  I guess that shouldn't be a surprise with a bunch of wrinkled, washed-up, old, 60s hippies influenced by commies like Bill Ayers and Frank Marshall Davis running the country.

Roger Simon writes an interesting piece for PJ Media comparing what's going on in these demonstrations to the Chinese Cultural Revolution under Chairman Mao, where millions were killed and up to a hundred million displaced or otherwise affected.


Recent events at the University of Missouri and Yale (where I attended graduate school), plus now other institutions, have only increased my apprehension. It’s not  at the level of the Cultural Revolution — professors haven’t been asked to wear dunce caps yet and no one (to my knowledge) has been killed — but the portents are not reassuring.

Mob rule, not anything close to democracy, is at play. The so-called SJWs (Social Justice Warriors) seem to be functioning as early avatars of the infamous Red Guard, bullying and then threatening violence to anyone whose thoughts run outside what is deemed to be correct.

College professors and administrators quiver in their path. In the case of Mizzou, the president resigned before any concrete evidence of racism was made manifest. It still hasn’t been days later. At dear old Yale, it’s even more bizarre because there were no imputations of racism in the first place, only that there might have been or might be. Forget Bull Connor and the KKK, inappropriate Halloween costumes were the new danger. It was all about having a “safe space” so feelings wouldn’t be hurt, as if the world could be perfect and the human species remade for an extraordinarily fragile generation of coddled students.

Saving the pull quote for last words (as I often do), Simon says:


Some people ridicule these students as “snowflakes” unable to stand up to the slightest discomfiting words or images. But it is far worse than that. These so-called “snowflakes” are the potential shock troops of the aforementioned Red Guard, American style. There is a fine line between the extreme entitlement that demands to be warned before reading Ovid’s Metamorphoses (as happened recently at Columbia) and a kind of narcissistic rage acting out against any presumed enemy in its path. How do you think the CR actually happened in China? Yes, the country was significantly poorer, but the psychological evolution was strikingly similar. 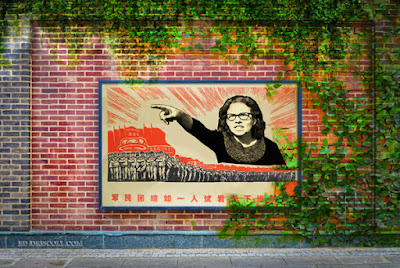