Dramatic foreshadowing is when an author mentions an important plot point early in a script that will be returned to later.  That's what I think today's endorsement of Hillary by Obama actually is.


“Look, I know how hard this job can be,” Obama said. “That’s why I know Hillary will be so good at it. In fact, I don’t think there’s ever been someone so qualified to hold this office.”

There's never been someone as qualified as Hillary?  Personally, I can think of a few more qualified people right off the top of my head, starting with at least half of the field of 17 Republicans who ran in the primaries.  Remember when they called her "the smartest woman in the world"?  I used to say that on an average day I worked with a half dozen smarter women before lunch. If you pick up a phone book in your town, odds are at least one person in there is as qualified as her to be president, assuming your town's white pages are longer than one page.

Hillary does have one historic first going for her.  She's the first subject of an active FBI felony investigation (mishandling of classified data) ever to become her party's nominee.  (Well, still technically their presumptive nominee, I suppose).

The foreshadowing?  The investigation of Hildebeest is entirely run by the executive branch.  The FBI is running the investigation.  The FBI will hand over their recommendation to indict (or not) to Attorney General Loretta Lynch.  FBI Director James Comey, and AG Lynch both work for Barack Obama.  After the president endorses her, do you think Director Comey can come forward with an indictment against Hillary?  Without him having his career trashed and run out the door?  Or being Vince Fostered?  With his endorsement, Obama has all but promised that if the FBI says to indict, it just ain't happening.

In fact, I think we're overdue for some sort of trumped up nonsense charges to start appearing in the press to discredit Comey in advance of anything out of the FBI.  Either that or the Obamanoids think they already have some sort of intolerable dirt on him now, and they have him in their pocket.   As famous Democrat darling LBJ used to say, "I never trust a man unless I've got his pecker in my pocket".

Let's get one thing straight: if the stories we're hearing are true, and there's no reason to doubt they are, she has committed several felonies.  For starters, Hillary did the same exact thing she fired the US Ambassador to Kenya for: use of private email for state department business.  For another:

Ken Cuccinelli, the former attorney general of Virginia, knows the laws regarding classified information firsthand. In his private practice, Cuccinelli defended a Marine lieutenant colonel court martialed on charges of possessing such information outside a secure facility. He says Clinton’s actions in the e-mail scandal clearly satisfy all five requirements necessary to sustain charges of mishandling classified material, and constitute a breach perhaps even more glaring than the one for which General David Petraeus was convicted.

Here's another thing: if she has done these things, she is forbidden to work for the Federal government ever again.  18 U.S. Code § 2071 — concealment, removal or mutilation generally of classified information says a guilty person “shall be fined under this title or imprisoned not more than three years, or both; and shall forfeit his office and be disqualified from holding any office under the United States.” [Emphasis added - SiG] Kinda difficult for a president.

As I've said before in various places, I've had those clearances (over 20 years ago).  If I had done what she did, I'd be in federal prison waiting for the investigation to complete, not frolicking  around the country on private jets.

There's speculation around the Interwebs that if AG Lynch or the DOJ drag their feet or act like they're going to do nothing, that Comey will resign and take a lot of people with him.  There's also speculation that the FBI/DOJ/AG letting Hillary slide will reverberate like a magnitude 10 earthquake through the agencies and companies full of workers that have to live under those rules.   Whether any of those people would walk off their jobs is harder to predict.  For one, folks gotta eat; for another, it just reinforces the widespread idea that justice works different for the ruling class.  Which is what has propelled Donald Trump to the position he's in now. 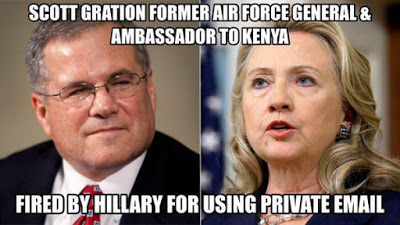