Makes 'Bout As Much Sense as Anything

From the emails today, although I have seen it around: 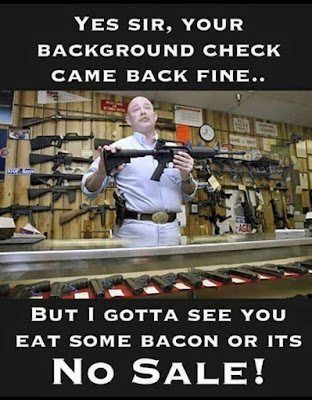 We know that the 9/11 Mooslims went to topless bars and did other things forbidden under their religion, and we know this guy in Orlando was apparently conflicted about being gay (you've seen the "self-loathing Muslim" meme going around).  Are they allowed to eat bacon to lie to non-muslims (taqiya)?

But it makes as much sense as anything the President or his minions have proposed.

Sorry for dropping off the radar.  I've been rather sick, in a totally new and different way.  Still haven't gone to the doc, but I might need to go to the urgent care place tomorrow if it doesn't get better.  Bad abdominal pain in the area right behind the bottom of my rib cage, below the sternum.  Just none of extreme symptoms they say to watch for.