Tales From the Over Regulated State #20 - Who Will Be the Gibson of Ivory?

In 2011, the Gibson guitars factory in Nashville was raided by Federal government agents for alleged violations of the Lacey Act and importation of Indian rosewood fret boards.  In reality, the situation was much more complex.  It first appeared to entail violations of the Indian laws as interpreted by the US DOJ, but in the end appears to have been totally political: a union-powered shakedown of a successful non-unionized company in a heavily unionized industry.


Thus began a five-year saga, extensively covered by the press, with reputation-destroying leaks and shady allegations that Gibson was illegally importing wood from endangered tree species. In the end, formal charges were never filed, but the disruption to Gibson’s business and the mounting legal fees and threat of imprisonment induced Juszkiewicz to settle for $250,000—with an additional $50,000 “donation” piled on to pay off an environmental activist group.

(The more common word for that $50,000 “donation” which prosecutors demanded is “extortion”).

Today, Knife Rights tells us of the sweeping new ban on ivory importation which recently passed congress.  You may know that the sale of new elephant ivory has been banned since 1989 and subject to all sorts of legislation since then intended to stop the slaughter of African elephants.  That means this law is based on the handling of ivory that's already in the US and has been for varying amounts of time.  If you're interested in all the details, go RTWT:


The new rule covers "interstate commerce" in only elephant ivory and not fossil ivory (see below an explanation of why interstate commerce covers much more than you might expect).  It includes two exceptions to the near-total ban, both of which will have an adverse effect on trade in ivory handled and decorated knives.


1. The antique exception covers ivory that's 100 years old or older and was never repaired or modified since 1973

2. The de minimis exception covers ivory that is less than 100 years old and is further narrowed by six other criteria, all of which must be met.

The rules for these exceptions appear to be a minefield.  For example, since any ivory sold 100 years ago didn't have today's documentation on it, someone will need to determine that it's an antique.  (I don't know if you have a receipt for that ivory from a sale in 1910 that anyone would believe it).  The problem is that while the Fish and Wildlife Service (who enforce this law) respects the experts who appraise ivory, there's no guarantee they're going to take the word of any expert.   Expert opinions are simply potentially useful and not determinative.  A well worded justification for why your expert says a piece is antique will go farther than just saying it is one.

The second clause might be more problematic.  Let's assume you have an ivory handled knife made in 1860.  According to that "never repaired of modified" clause, if you had that knife repaired after 1973, it magically became new ivory and not antique!  It's hard figure out a rational reason for that.

The de minimis exceptions are even worse.  It consists of six criteria and every word of all six must be met for it to be legal to sell a piece of ivory.


FWS refused to create any "safe harbors" or binding criteria that a seller could rely upon to be certain an item qualifies as an antique or under the de minimis exception. Instead, it is totally up to the discretion of enforcement personnel whether proof or documentation in any given case is sufficient to prove whether an item is an antique or meets the de minimis exception. FWS said that more guidance would be forthcoming, which typically means that after enough issues arise in seizures and prosecutions, they will use their dispositions to provide further clarification of what they can get away with.

FWS also maintained their position that the entire onus is on the ivory seller to prove themselves innocent. If they seize your ivory-handled knife, it is up to you to prove that it is legal. They have no obligation to prove it is illegal. So, yes, this means you are guilty until you prove yourself innocent, the opposite of how justice is supposed to work in America.  [Bold added - SiG]

Welcome to the new police state of America, where most of us commit Three Felonies a Day without ever knowing it and everything is forbidden unless there's a specific law allowing it.  And we could go on with examples for that all week.

Knife Rights goes on to say that the law is like most of the laws the enviro-nuts and flakes get passed: well intentioned but stupid, and divorced from reality, ending up as just a way to feel smug.  Not once since the first ban in 1989 have ban advocates been able to provide any rational connection between these bans on ivory that's been legally here in the U.S. for decades and the poaching in Africa.


The FWS and proponents of the bans have lied since day one about the size of the illegal elephant ivory market in the U.S. which is utterly insignificant compared to China, estimated at 95% or more, and insignificant compared to almost all other countries as well. The U.S. trade in illegal ivory was already essentially the lowest in the world before this ivory ban campaign began.

The FWS has continued to lie about the current situation in Africa which has actually seen a significant DECLINE in poaching of elephants since 2011, prior to when this rule was first proposed in 2012. This decline has been the result of a combination of enhanced law enforcement in Africa and Asia along with a drop in demand for commodities like ivory in China. These efforts were already achieving the desired reduction in illegal elephant poaching. The ban does nothing to further efforts to reduce poaching in Africa.

So you just know that someone who makes pianos with ivory veneers on their keys, or someone who makes ornamental pieces (scrimshaw), or a knife maker is going to fall into the same trap over ivory that Gibson got snared by.  A prosecutor with a union buddy, or some other agenda, will go after a business that's the same as every other business in terms of what they use, but they won't have crossed the right palms somewhere so they'll be extorted like Gibson was.  I just have to wonder who it's going to be. 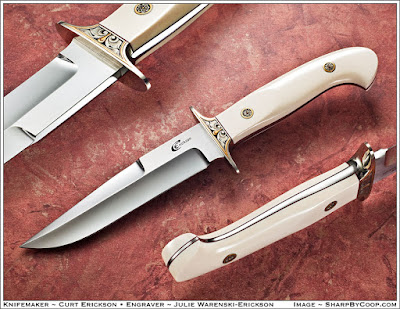 (source - fairly far down this page)