I've Got The Angles Down 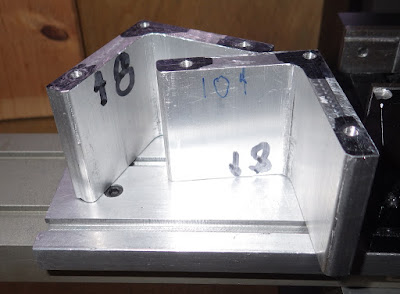 My scrawled writing of "8" in broad tipped marker and "10" in fine tipped marker was to remind myself not to space out and drill the wrong-sized holes.  Yeah, BTDT a couple of times.

This, as you can see, was pretty simple work.  I cut the pieces to length a few weeks ago and was puzzling over the best way to hold them for the drilling, finally deciding to use the G0704 as a precise drill press.  I found that if I clamped one edge in my vise, and left the perpendicular edge just hanging there in space, that the angle wasn't close enough to 90 degrees to dial in a position to drill.  Over the 2 1/2", the angle diverged from 90 enough to put the far end (far from the vise) about .012" out of place.  So I was able to hold the pieces in the vise with the two edges on one jaw and the corner on the other jaw.   I marked them "old school": I colored the areas where I needed to work with the black marker, then scratched out the location of the hole centers.  Setup was a bit more manual, but no big deal.

The bigger, more important piece is the Y-axis extension.  This is a replacement for the one I wrote back in March; that one got obsoleted by my change over to ballscrews.  Which negates all my concern about the other one being made slightly wrong.  This time, instead of cutting a big hole which gets a diameter step (counterbore) using my ultra light duty CNC mill, I bored this one out on the G0704 itself. 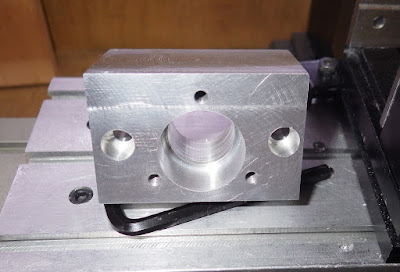 There's somewhat of a jigsaw puzzle of how all this goes together, which I probably shouldn't get into too much, but this part goes on the end of the Y-axis, and those two, big, counterbored holes on the ends get hardware to press it onto the cast iron body of the mill.  A motor mount that I'll make next goes on top of this, compressing a set of bearings that get mounted in the big counterbore; the bearing mounting helps take out backlash.   I'm down to three pieces of aluminum to cut: two identical pieces (motor mounts) which are fairly simple and small, and the big X-axis end cap I wrote about back in April which will take some time to machine.  Then it will be time to take apart the mill, which obviously means I won't be able to do any more work with it.  So I'd like to be pretty sure everything is in good shape and working before then.

All of the parts in this post will be visible when the upgrade is done (unlike the ballnut mounts I did previously) so I think I'm going to paint them.