The Birth of Many Projects to Come

Last April,  I told the story of how I completed my kit guitar with the help of a friend who has worked as a luthier.  There's almost no limit to the number of tools one could get if they wanted to handle any work on their own guitars; the big guys seem to have a tool for everything and my friend has a lot of them.  I enjoyed the experience of learning how to do these things, and have made and acquired some tools that seemed useful, although I have a long way to go to having even a poorly equipped guitar shop.

I've thought about learning how to do more, but the idea of breaking one of my guitars to learn how to fix it is, somehow, not very appealing.  I started to search eBay for a good deal on a broken guitar, just so I could learn how to make some repairs.  Even broken guitars seem to sell for over 50% of what a new one ought to sell for, and I find that the idea of dropping 2 or $300 on a broken guitar that - maybe - I could resell at what I paid isn't any more appealing.  So how do I learn?  I've chatted with this friend about this; he said he thought it was a good idea.  He got his experience in a couple of classes, and then fixing guitars for income.

While we were out of town a couple of weeks ago, he emailed me to tell me he's got a guitar that he picked up from a store that was going out of business.  He said the guitar was in the way asked if I'd like to take it.  He said it was a Breedlove acoustic guitar and that it was some sort of a sales demo that had a chunk of side taken out of it so that customers could see how it was made.  The idea is that it's about as broken as broken can be, so I can mess with it with complete impunity.  Pull frets to learn how to replace them?  Why not?  Crack the sound board to see if I can fix said crack?  I probably can't make it sound any worse.  Steam the neck off?  Sure, why not.  Naturally, I said, "sure I'll take it".

I picked it up last night.  This morning, I started looking over the guitar in some detail.  It's actually a fairly nice guitar!  The top is solid Sitka spruce, which isn't that uncommon once you get past the very cheapest guitars; the back, though, is solid rosewood and that's something I expect to find only in fairly high end guitars.  The sides are rosewood laminate (plywood), but a guitar's sides are largely structural and don't affect sound very much.  I've heard the tone wood golden rule is first the top, then the back, then the sides.  When new, they look like this:

Now this one doesn't have any of the tuners (the gold-finish pieces on the head stock at top in this pic), and it doesn't have a nut or saddle (the white horizontal-ish pieces at the top of the neck, and in the dark piece (the bridge) on the lower part of the body).  It doesn't have the electronics that these came with.  Most importantly, the top and bottom pieces of the top edge (left side in this picture) have been cut away and the side is missing.  In a word, it's unplayable, but that's the point of getting it. 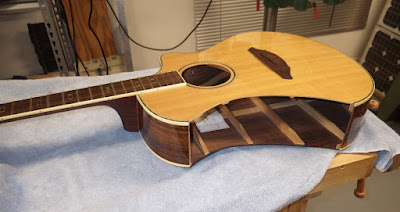 My mental gears are turning.  I'm curious about how it sounds now.  I could get a set of tuners, nut and saddle and have it able to make sounds for under $100 - maybe half that if I use no-name parts. That's probably necessary, too.  I mean, I can't tell if I ruined a setup, or added a fret that buzzes unless I can get sounds out of it.  The foot long hole in the side will be a problem, but I can live with that.  Actually, several custom luthiers make guitars with a solid body and the sound hole moved up to the top edge, making this example an extreme version of this approach.  As I work up to it, I might try to restore that cutaway section.  There's a lot of projects there.  But first projects first: work continues on the G0704 CNC conversion tomorrow.