I gotta say this is a new one on me; I had not heard of liquid flow batteries.  Design News links this week to a research paper from MIT on a new method of using creating batteries.  MIT says liquid batteries have been around since the 1970s.  The only ones I've read about are molten salt and one or two other "exotic" batteries (read "will kill you in an ohnosecond if things go wrong" batteries).


Liquid flow batteries — in which the positive and negative electrodes are each in liquid form and separated by a membrane — are not a new concept, and some members of this research team unveiled an earlier concept three years ago. The basic technology can use a variety of chemical formulations, including the same chemical compounds found in today’s lithium-ion batteries. In this case, key components are not solid slabs that remain in place for the life of the battery, but rather tiny particles that can be carried along in a liquid slurry. Increasing storage capacity simply requires bigger tanks to hold the slurry.

These batteries require pumps and the energy that runs them, which decreases the amount of energy available.   Because of the pumps, tanks and that structure, liquid batteries are aimed at permanently fixed energy storage installations, such as storage for solar energy facilities to provide power when the sun's not out, or storage for wind power when the wind isn't blowing.  They're not mentioned as under considerations for electric cars or other, more portable, uses.

When we think of water, one of the things that word association gives us is "flows downhill", and these MIT researchers envisioned a cell that could use that ability to flow under gravity assist.  The result is a new concept that functions like an old hourglass or egg timer, with particles -- in this case carried as a slurry -- flowing through a narrow opening from one tank to another, according to researchers. The flow then can be reversed by turning the device over. 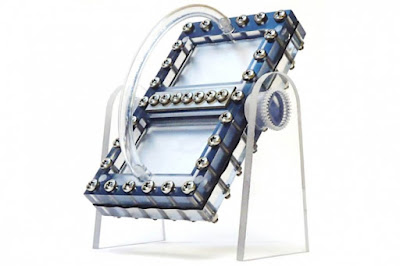 In the proof-of-concept version the team built, only one of the two sides of the battery is composed of flowing liquid, while the other side — a sheet of lithium — is in solid form. The team decided to try out the concept in a simpler form before making their ultimate goal, a version where both sides (the positive and negative electrodes) are liquid and flow side by side through an opening while separated by a membrane.

The principle investigator, Dr. Yet-Ming Chiang (MIT's Kyocera Professor of Ceramics), says to think of this like a concept car.  It's not intended to go into production but to demonstrate that the concepts are viable.  Chiang said,


“We were seeking battery designs that could be manufactured simply and with a minimum of unit operations,” he said. The team also was motivated to break the limits of the two primary types of battery design -- stationary batteries with no moving parts, and flow batteries with actively pumped fluids, he added.

As an interesting side note, they say the trickiest part of the design was getting the viscosity of the slurry right.  It's like a familiar problem we all know.


The thick liquids behave a bit like ketchup in a bottle — it’s hard to get it flowing in the first place, but then once it starts, the flow can be too sudden. Getting the flow just right required a long process of fine-tuning both the liquid mixture and the design of the mechanical structures.

Why do I hear Carly Simon singing "Anticipation"?   (If you don't get that joke, you're probably under 40.  The explanation is here, but dire warning for the really bad ear worm.  If I didn't give it to you already.)