EE Times points out an interesting little research story at the University of North Carolina, a wearable health-monitoring device powered by energy scavenged from the person wearing it.


The wearable Health and Environmental Tracker (HET) aims to anticipate, for instance, an oncoming asthma attack and recommend immediate action to thwart the event. Researchers hope that, eventually, most any chronic malady can be similarly addressed by such sensor studded wearables powered by energy harvested from the patients own body. To address this issue, the National Science Foundation (NSF) is funding the Advanced Self-Powered Systems of Integrated Sensors and Technologies (Assist) project with up to $40 million.

Wearable electronics, things like a FitBit are near the peak of the hype cycle, with all the market cheerleaders saying they're the Next Big Thing, so it's an idea at the right time.  FitBits and Smartwatches are powered by batteries, but to be really useful, devices like this HET need to be ultra low power, so that they can be powered by energy harvested from the wearer.  My first thought would be to harvest tiny amounts of the power used in each leg stroke while walking - taking so little that it doesn't perceptibly increase the difficulty of walking.  This one takes a different approach because their target is to warn people of oncoming asthma attacks.


"We are targeting asthma attacks first, in cooperation with partners at the University of North Carolina (UNC, Chappel Hill)," (principal investigator) Bozlurt said. "The Environmental Protection Agency told us the correct wellness and environmental-parameters we needed to monitor in order to anticipate asthma attacks."

Consequently, Bozlurt, (research assistant) Dieffenderfer and associates split the functionality between a wrist worn sensor hub, a chest-adhering patch and a handheld breathalyzer. The wristband focuses largely on environmental factors, monitoring volatile organic compounds and ozone in the air, as well as ambient humidity and temperature (the wristband also includes additional sensors to monitor motion, heart rate, and blood oxygen levels), then transmits collected data wirelessly to medical professionals. The patch includes sensors that track a patient’s movement, heart rate, respiratory rate, the amount of oxygen in the blood, skin impedance and wheezing in the lungs. And the handheld breathalyzer -- called a spirometer -- measures lung function.

It was graduate student James Dieffenderfer who came up with the idea of harvesting energy from the person's breathing to power the HET by using a tiny windmill.


In fact, the project has already won one award for its energy harvesting spirometer which contains a tiny electricity generator that is driven by the user blowing their breath into it, thus powering the device. Dieffenderfer won a Center for Integration of Medicine & Innovative Technology award for his energy harvesting spirometer. The $150,000 award will be used by Dieffenderfer to develop and market his innovative energy-harvesting health devices to consumers.

Asthma is still a killer, even in developed nations.  Statistics say that in the US, it kills around 3400 people a year, out of 24.6 million people with the disease.  Globally, a quarter million people die from it every year.  The idea that a device can monitor air quality parameters and the way the user breathes and detect a serious asthma attack is an interesting project.  Since no one has ever done tried to monitor continuously in real time like this, no one really knows if they know how to predict such an attack.  (One of my standard sayings to the young engineers, "when you look at something no one has ever looked at before, you see things that no one has ever seen before"!)  That means they'll be running clinical trials to make sure they really have the subject covered. 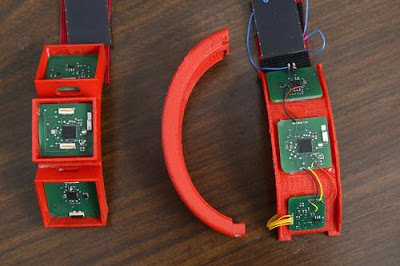 (Early prototype of the HET wristband)


Once the conditions for an imminent asthma attack are determined during clinical trials, a specialized cost reduced version can be produced. In the event that different things stimulate asthma attacks in different people, personalized versions will be created.  Initial experiments will be done in controlled environments with industrial partners who want to use the technology in future products.

They expect to be ready to go to production in around four years - in 2020. It's quite a reach to call such a limited use device a "wearable doctor", but it could mark the beginning of a very interesting trend.

Posted by SiGraybeard at 8:14 PM