I haven't seen this reported in my usual reads, but there apparently was an attempt to get at Julian Assange in the Ecuadorian embassy in London, where he's being guarded.  It occurred at almost 3:00 AM on the morning of August 21.  In Assange's own words, he live-tweeted:

Assassination attempt?  It's a safe bet that someone climbing walls at 2:47 AM, dressed completely in black and on the dark side of the building, isn't the welcome wagon bringing cookies; whether or not they had tools of some sort and were intending to kill Assange or not must remain speculative since the wall climber got away.  And "fled after being caught by security" sounds like either a professional or a pretty good amateur.  If it was your family, would you assume that was an attempt to murder them?  Yeah, me too.

In April, Assange's lawyer, John Jones, was killed by being hit by a train.  Although police originally said, "nothing suspicious here" and ruled it a suicide, eye-witnesses indicated that they saw two men talking that night by the train tracks and then after the accident, the second man went missing.  An investigation followed and it was ruled to not be a suicide.  He was "suicided": murdered. 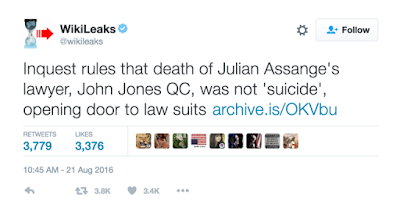 I think everybody knows that Assange has said several times that he has a document dump that will destroy Hillary and is waiting for October to release it, right?  Let's hope he has backups in places that will automatically dump those documents should someone get to him.

It's widely believed that Assange's lawyer had access to all of the Wikileaks documents that have been gathered about the DNC, although since his death was four months ago, it couldn't have been the most recent documents.  If you combine his lawyer's murder, the coming Wikileaks "October Surprise", and read this wall climbing as an attempt on Assange's life, it's not unreasonable to assume someone is trying to clean up the Wikileaks "problem".  It seems like ample motivation for someone on the Hillary campaign who's already unbalanced to eliminate Assange.  Add to this the interview Megyn Kelly did with Assange where he implies (a few times) that murdered democrat staffer Seth Rich was a Wikileaks source and had already taken the unprecedented step of offering a $20,000 reward for information leading to the conviction of Seth Rich's killer.  Given all that, it's hard not to think that "someone" apparently views Assange as a problem and is trying to get rid of him by slightly more subtle means than dropping a 2000 lb bomb on the Ecuadorian embassy.  Whether it's ordered by Hillary herself or someone else is a secondary question. 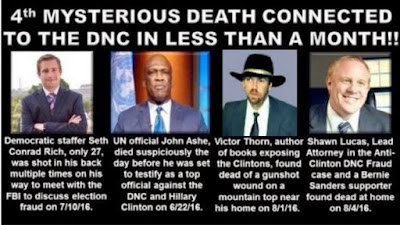 Sure seems to be "something contagious" here that comes from testifying against the DNC and Clintons, doesn't there?

I would caution Julian Assange to stay away from windows and as far inside the embassy as he can get.  With confirmed sniper kills out beyond two miles, a good rule of thumb is that if one can be seen, they can be shot.

Posted by SiGraybeard at 5:12 PM