This Is Not a Toy

We opened the front door to go out to the car and found several of these things in the grass. 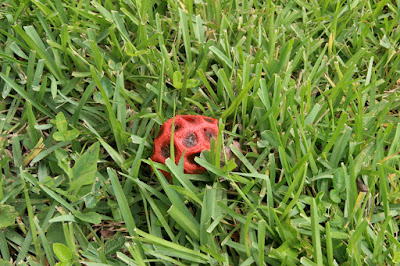 Looks like a plastic toy, doesn't it?  Following my usual rule of thumb that any unknown object in Florida could turn out to be an alien egg that will launch a face hugger on me and lay an egg in my chest, I left it alone.  We all know how that turned out, now, don't we?

It clearly wasn't plastic; it was rather red/orange and had stinky liquid on it that attracted flies.  A little searching revealed a fungus that looks quite a bit like these little things:  Clathrus crispus, commonly called stinkhorn.  There's a lot of fungi in this group, many of them singularly creepy looking, with many having bright colors like this, and there are many videos and photos online.  Do an image search for one called "Devil's Fingers" if you want to see some bizarre looking examples.  I've never seen one of these things in my 60+ years in Florida.