Courtesy of Daily Signal, we get one of those stories that makes you shake your head.  The somewhat-long-titled article is, "I’m a Black Woman Whose Relatives Fought for Civil Rights. I’m Disappointed in NAACP’s War on School Choice."  If you listen closely, you can hear MLK and some of the civil rights leaders of the 60s spinning in their graves.


Last week, the Florida Education Association—the state’s largest teachers’ union—along with the Florida NAACP and other plaintiffs made a third attempt to challenge Florida’s tuition tax credit scholarship program, which allows individuals and companies to receive tax credits if they donate to a scholarship fund that helps low-income students attend the school of their choice. [Emphasis added: SiG]

I added the bold specifically to bring your attention to that this is their third attempt to block this tuition tax credit scholarship program.  Obviously, they really, really don't want this to pass.  I can understand the Florida Education Association fighting this: they're a teachers' union and chances are if the students are going to schools where they need scholarships they're (1) private schools, (2) non-union schools and (3) better schools than the ones the FEA members teach in.  They have a vested interest in mediocrity, as a casual glance at public K-12 education in the country reveals.

A little poking around added the other names that are trying to stop these scholarships: the Florida School Boards Association, the Florida PTA, the Florida Association of School Administrators, and the League of Women Voters of Florida.  The opposition to this group appears to be school choice advocates including pastors and loosely-organized parents.  It's likely that some of the pastors may benefit from the addition of students who receive these scholarships.


Thanks to a lawsuit, over 92,000 kids, many of them children of color, from low-income families are at risk to lose their privately funded scholarships to attend the private schools of their choice.
...
After losing in trial court and then again in the 1st District Court of Appeals, the Florida Education Association and NAACP, along with other parties, appealed to the state Supreme Court on Sept. 14. Their lawsuit challenges the constitutionality of the 15-year-old education choice program.

The author, Virginia Walden Ford, goes on to give examples of how important getting a good K-12 education was for her and others she knew, both as an end in itself and as a preparation for a college education.  She acknowledges the helpful role the NAACP played in those days, but criticizes them for this move, rightly IMO.


The NAACP, which was started to support the rights of black people, is now taking a position that, in my opinion, only hurts black children and other children of color’s chance of getting a quality education in this country through access to school choice. Involving itself in lawsuits against the Florida Tax Credit Scholarship Program seems counter to their mission.

I have been involved in advocating for school choice for the last 20 years and I still don’t understand why anyone, especially the NAACP, would oppose families having a choice in education.

Why, indeed.  Here's a clue: unions and politics, mostly Democratic politics.  The NAACP is following Black Lives Matter on this, as BLM has recently called for a moratorium on charter schools, arguing that what they call corporate control of schools leads to “unhealthy learning environments.”.   This led St. Paul, MN BLM leader Rashad Anthony Turner, who has been a school choice advocate in Minnesota and anti-police BLM protest leader, to leave the group.  Turner said his support for charter schools and education reform put him at odds with the group.  Look at that list of organizations suing to stop the scholarship program.  Not a conservative in the bunch. 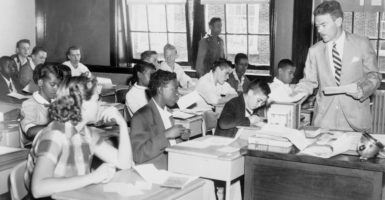