UK Mail: Comey Sick of Stack of Resignations, Being Dissed By FBI

According to the Mail today, FBI Director Comey was essentially forced into his latest email reveal by the agency's other employees.  The FBI, collectively, was madder than hell at Comey for ruining their reputations.


James Comey's decision to revive the investigation of Hillary Clinton's email server and her handling of classified material came after he could no longer resist mounting pressure by mutinous agents in the FBI, including some of his top deputies, according to a source close to the embattled FBI director.

'The atmosphere at the FBI has been toxic ever since Jim announced last July that he wouldn't recommend an indictment against Hillary,' said the source, a close friend who has known Comey for nearly two decades, shares family outings with him, and accompanies him to Catholic mass every week.

'Some people, including department heads, stopped talking to Jim, and even ignored his greetings when they passed him in the hall,' said the source. 'They felt that he betrayed them and brought disgrace on the bureau by letting Hillary off with a slap on the wrist.'

He told his wife that he was depressed by the stack of resignation letters piling up on his desk from disaffected agents. The letters reminded him every day that morale in the FBI had hit rock bottom.

Maybe I watched a bit too much of Efrem Zimbalist Jr. during my junior high and high school days, but his lack of spine was disgraceful an FBI agent, let alone director.  As I said before, everyone may assume that he went full weasel on this because of concern for showing up dead, but I thought guys in his position weren't supposed to be so easily intimidated.


If you're thinking someone on the left has a franchise on horses' heads to stuff into the beds of chickenshits like Comey, isn't the FBI director supposed to be the kind of guy who will stand up to thugs like the mafia or the drug cartels without backing down due to personal fear? Isn't the "Chief Law Enforcement Officer" of the country supposed to be fearless, willing to fight the thugs? At 72, Rudy Guiliani comes across as much more fearless than the 55 year old Comey.  [Nota Bene: I realized shortly after writing this that the term "Chief Law Enforcement Officer of the country" is the attorney general, not the director of the FBI - SiG]

It's an interesting article.  If you can believe the Mail's source, Comey clearly knows he screwed up, and screwed both the agency and people he cares the most about.  He has a guilty conscious - which he should, IMO.  On the more pragmatic side, there are indications he's afraid that he'll be caught in a roll-up of the corrupt, should Trump come in and appoint someone to drain the swamps.

With Loretta Lynch putting herself back into the middle of this (she had previously recused herself from the case), there are no guarantees anything will come out of it.  Her first act was to tell Comey not to go forward with investigating the new emails.  Lynch and Obama are reportedly steaming mad at Comey.  A short perusal of the Sunday news/talk shows is all you need to take to know that the Hillary camp and DNC have decided the only way they know how to respond to this is by character assassination on Comey.  The vitriol level is on a par with the great floods of all time.  Harry Reid is making up charges like he did about Mitt Romney not paying his taxes.  It's the only response they know: "if you can't attack the message, attack the messenger". 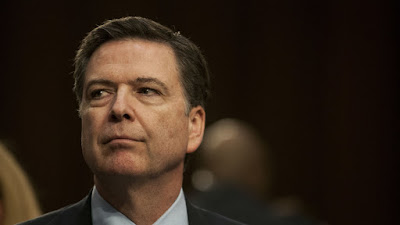